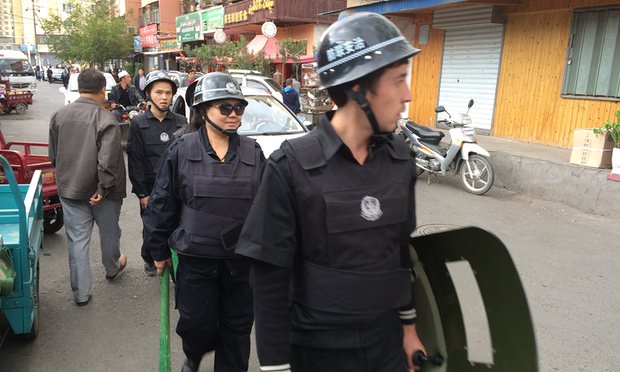 Reuters’ Christian Shepherd reports that two CCP officials in Xinjiang have been placed under investigation for “serious disciplinary breaches” days after a deadly attack occurred at a government building under their jurisdiction:

Both officials are also being investigated for dereliction of duty, the commission said in online statements.

The commission did not give details of either official’s suspected wrongdoing. They could not be reached for comment.

[…] The pair are just the latest in a long line of party officials to be investigated for graft since President Xi Jinping waged war on corruption in the party after assuming power four years ago. The cases are publicised on state media on an almost daily basis.

Resource-rich Xinjiang has been home to waves of violence in recent years, with hundreds of people killed in incidents often sparked by tensions between the Muslim Uighur people who call the region home and the ethnic majority Han. [Source]

Attackers drove a vehicle into a government building in China’s unruly far western region of Xinjiang, setting off an explosive device and using knives to kill two people before all three of the assailants were shot dead, state media said on Thursday.

[…] The Xinjiang government said in a short statement on its main news website the incident occurred just before 5 p.m. (0900 GMT) on Wednesday in Karakax county, deep in southern Xinjiang’s Uighur heartland.

It said “thugs” drove a vehicle into a yard at the county Communist Party offices and detonated an “explosive device”.

The official Xinhua news agency, citing the Ministry of Public Security, later said all three of the attackers were shot dead, but not before they killed a security guard and a government official and wounded three others.

Xinhua described the incident as a “terrorist attack”, and said the attackers also used knives. [Source]

Coverage of the disciplinary inspection into Zhuang and Hu from the South China Morning Post notes that the two are likely to be sacked following attacks in their jurisdiction, citing precedent in the region since the installation of Chen Quanguo as Party chief of Xinjiang:

Official reports had earlier said that both Pishan county’s party boss and county chief were replaced in September.

The reshuffle came immediately after an attack in the county, according to two sources familiar with the matter.

Pishan county is also part of Hotan prefecture, one of the districts in the region that have experienced the most attacks.

The practice of sacking officials immediately after attacks had been adopted by the region’s new party chief since August, Chen Quanguo, the sources said.

[…] “Chen is looking to enter the Politburo [during the 2017 leadership transition] and had told cadres that no accidents were allowed,” a source close to Xinjiang authorities said. “But he had never visited southern Xinjiang himself.” [Source]

In May 2014, authorities launched a nationwide crackdown on terrorism in response to an increase in violent incidents in Xinjiang and elsewhere in China. The campaign, focused mostly in the Xinjiang region, has steadily escalated over the past two years, and has included controversial policies targeting the rights of the predominantly Muslim Uyghur minority that have been criticized by international rights advocates for exacerbating ethnic tensions. Amid the campaign, Chinese authorities have expressed concerns that some Uyghurs are traveling to the Middle East for jihad training, and have controversially attempted to restrict mobility of Xinjiang residents with passport recalls across the region. Chinese authorities have long attempted to tie domestic attacks to the global jihad movement, and a report from a U.S.-based think tank last July claimed that over 100 Uyghurs had joined the Islamic State between 2013 and 2014.

Last August, a Uyghur militant detonated an explosive device at the Chinese Embassy in Bishkek, Kyrgyzstan, leading a Uyghur ethnic rights group to express fear of increased persecution of Uyghurs living in China. Following the deadly New Year’s Day attack on a nightclub in Istanbul, Turkey, a senior Turkish official said that he suspected the gunman was Uyghur, and the state-run Anadolu News Agency reported that several detained suspects are Uyghur. At The Guardian, Jason Burke describes evidence suggesting that the Istanbul attacker may have been a Uyghur; meanwhile, following erroneous claims that the Istanbul attacker was Kyrgyz, Catherine Putz at The Diplomat warns against jumping to conclusions.

Updated at 16:00 PST: The AFP reported on January 9 that the Istanbul attacker has been identified as an Uzbek member of the Islamic State.