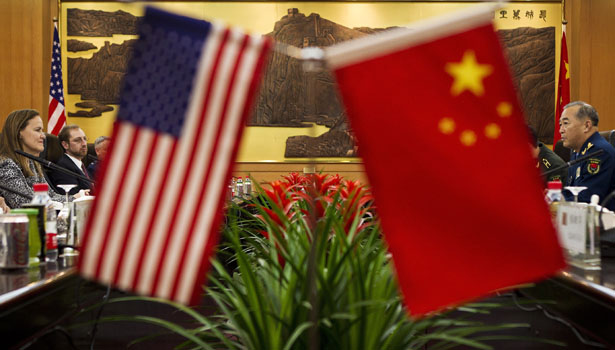 China’s State Council Information Office has issued the “Human Rights Record of the United States in 2016,” its now traditional response to the U.S. State Department’s annual reports on human rights conditions around the world. Beijing had already dismissed the China section of the latest U.S. report, released last week, as “unfounded and full of bias,” insisting that China “attaches great importance to protecting and promoting human rights.” Xinhua reports on this year’s criticism of America’s rights protection and hypocrisy:

China’s report says that the United States poses once again as “the judge of human rights”.

“Wielding ‘the baton of human rights,’ it pointed fingers and cast blame on the human rights situation in many countries while paying no attention to its own terrible human rights problems,” it says.

“With the gunshots lingering in people’s ears behind the Statue of Liberty, worsening racial discrimination and the election farce dominated by money politics, the self-proclaimed human rights defender has exposed its human rights ‘myth’ with its own deeds,” it added.

Concrete facts show that the United States saw continued deterioration in some key aspects of its existent human rights issues last year, according to the report.

The United States had the second highest prisoner rate, with 693 prisoners per 100,000 of the national population, the report says. […] [Source]

The SCIO has released a report on U.S. human rights each year since 1998. While this year’s SCIO document is largely consistent with previous years’, Reuters’ Michael Martina notes that it comes amid heightened global criticism of the rights situation under President Trump:

On Wednesday, the U.N. High Commissioner for Human Rights, Zeid Ra’ad al-Hussein, said U.S. President Donald Trump’s comments about migrants, Mexicans and Muslims were “harmful and fuel xenophobic abuses” and that his immigration policies could lead to breaches of international law.

At the Hong Kong Free Press, Elson Tong notes that the 2016 election and Donald Trump’s campaign remarks appear to have inspired some of the points that made it into the SCIO report, which quotes the president directly at one point:

On one occasion, the report directly cited President Trump as having said during his election campaign that “crime is out of control, and rapidly getting worse” – a claim which was disputed by some major US publications.

[…] The State Council’s criticism of political rights in the US was reduced from seven paragraphs in its 2015 report, to just four paragraphs in the 2016 edition.

Nevertheless, numerous references were made to the November election, which saw the victory of Republican candidate Trump. “Voter turnout and support rate reached new low[s],” it read. “A growing number of Americans were disappointed or even angry about the election.”

[…] The State Council accused the US media of providing biased election coverage: “The media clearly chose their side in covering the election. [Source]

The vast majority of media coverage of this year’s State Department reports focused not on their content, but on their uncommonly low-key launch. Secretary of State Rex Tillerson declined to be present at the release, and an anonymous department official answered questions only by phone. Both preceding and following Trump’s electoral win last November, some China-focused experts suggested that the Trump administration’s expected downgrading of human rights as a priority could have a chilling effect on progress in China. Since his inauguration, others have found comparisons to be made between his White House and Zhongnanhai.