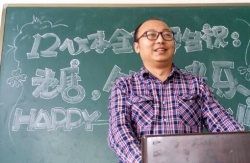 Anti-South Korean sentiment spiked in China after Beijing castigated the recent American deployment of the Terminal High Altitude Area Defense (THAAD) system in South Korea. The deployment, agreed upon last year by the Obama and Park administrations, began after continued missile tests from North Korea. Since the agreement last July, Beijing has continued to voice concern that the system’s surveillance capabilities could be used against China. Earlier this month, Chinese state media reportedly encouraged street protests and boycotts against South Korean companies, Korean TV dramas and music videos—pop culture staples in East Asia—were banned from Chinese streaming sites, and as many as 80 percent of China-based Lotte Mart stores have reportedly been forced to shut down. South Korea’s Yonhap News Agency, however, last week reported on a survey suggesting that a majority of Chinese disagree with the Beijing’s unofficial sanctions. Sixth Tone earlier reported that internet celebrity Mu Yalan received considerable online backlash after committing to boycott South Korean products, with some netizens accusing her of using the political standoff for self-promotion. Read more on public aversion to aggressive online nationalism, via CDT.

On his WeChat account, pop-psychologist Tang Yinghong last week analyzed this most recent round of highly publicized and officially sanctioned nationalism, which he sees as “false patriotism” carried out by “scoundrels.” CDT has translated Tang’s essay in full:

Patriotism That Fills its Ranks with Scoundrels is Shameful

This evening [March 23, 2017], China and South Korea competed in a World Cup qualifying match in Changsha. Initially, this was considered an unimportant game, as China and South Korea had gone head to head dozens of times in the past, with South Korea’s national team provoking jealousy and hatred among Chinese soccer fans, who resented the Chinese team for failing to live up to expectations and facing certain defeat every time they played against South Korea. Their dread of South Korea had become a phobia.

Indeed, today’s game had the host city staring down its arch-rival. Purportedly, the He Long Stadium in Changsha, which can seat 55,000 people, only sold 30,000 tickets to the event, because roughly 10,000 police officers would be present to maintain order. That is approximately one police officer to keep an eye on every three soccer fans. Moreover, according to a notification released by Changsha’s Public Security Bureau and the Changsha Organizing Committee’s Security Department, when purchasing tickets, fans had to adhere to strict real name regulations. When presenting their tickets, their names had to match their ID cards. The fans had to arrive at least an hour early to line up for a security inspection before entering the stadium.

There is a link between the way this ordinary soccer match became so anxiety-ridden and the recent “patriotism” movement with its ulterior motives for inciting boycotts against South Korea. This instance of boycotting South Korea, and in particular the absurdity of boycotting South Korean businesses, has already been analyzed in previous articles, and will not be discussed here. What will be discussed here is that despite the stadium gearing up to meet its arch-rival—putting thousands of police officers in place to maintain order, and on top of that, implementing the most severe sporting event safety protocol in history—if you covered up the background, you would think that this soccer game was being held in Beirut. However, with the encouragement of a certain CCTV host, starting at 2 a.m. this morning, Chinese soccer fans began setting off firecrackers every 10 minutes outside the hotel where the South Korean team was staying.

I remember more than 30 years ago, when soccer king Pelé acted in the movie “Escape to Victory.” Nazi Germany’s national team and the Allied prisoners of war held a game, and in the end, the Allied prisoners of war claimed victory, and escaped death in heroic fashion. Although the two sides were at war, the soccer match superseded political differences. The referees blew their whistles with obvious bias, but the Nazi team still respected the rules, and respected their opponents, so when they faced the prisoners of war— their captives—they lost the game.

My guess is that the tight security at tonight’s match in Changsha would not lose against the match from “Escape to Victory” in terms of vigilance. But the depraved behavior of that CCTV host and those Chinese fans harassing the South Korean team with fireworks in the middle of the night is something that I’m afraid even the Nazi devils wouldn’t do.

Acting like a scoundrel in the name of false patriotism is essentially an unavoidable chronic illness present in societies that lack moral standards. British author Samuel Johnson’s widely admired admonition, “patriotism is the last refuge of a scoundrel,” expresses the contempt that a true patriot feels towards such people. Those so-called “patriots” who quietly boycotted South Korean businesses in recent times are nothing short of that.

Especially the people at the school below, who organized primary students to publicly boycott South Korean businesses. Teachers like that may be self-righteous, but they are nothing short of scoundrels acting in the name of false patriotism. 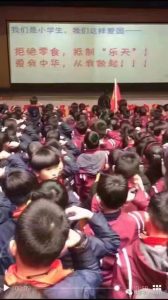 “We are primary school children, and this is how we are patriots – We refuse snacks, we boycott Lotte! Loving our China, starts with us!”

There is also the public WeChat account that fraudulently claimed that there were ties between Apple products and Tibetan independence. But in reality, the (Product) Red model is a public welfare product, and a portion of the earnings will be donated to Global Funding, a charitable fund, which has previously supplied financial assistance to the Chinese Center for Disease Control for AIDS prevention for more than three years. These claims came only because (Product) Red’s official Instagram account posted a message wishing the 14th Dalai Lama a happy birthday on July 7th last year.

The problem is that in China’s official terminology, the Dalai Lama is a “separatist” who is to be combatted and resisted. However, in international terminology, he is a recipient of the Nobel Peace Prize and an eminent monk and sage. What difference is there between the public welfare organization founded by Bono, former lead singer of the band U2 and a fan of the Dalai Lama, and Chinese celebrities being fans of Master Wang Lin, or someone being a fan of any of the real or fake Chaoyang rinpoches? They are not fans of the Dalai Lama’s political request for separation from China, but rather they believe that he is a rinpoche. Apple is merely conducting a public welfare partnership through (Product) Red, and it is offering assistance with the public welfare movement’s platform and public reputation, which has nothing to do with some members of the organization being fans of the Dalai Lama. It was merely because of this that Chinese domestic opinion was guided to boycott Apple’s “Red China” cell phones, and regardless of whether it was through intention or action, this is the face of none other than scoundrels who want to see the world in chaos. If you follow this logic, paper renminbi bills from 1 yuan to 100 yuan all have the face of someone who previously shook hands with the Dalai Lama stamped on them, so should we boycott even the renminbi?

Patriotism is a sincere emotion that arises from human nature. It was originally our affection for our home villages and our native land. It was neither noble nor despicable. However, patriotism is the easiest mask for scoundrels to play with. As long as it is in the name of false patriotism, those shameless shady dealings for personal profit seem justified and beyond criticism. When the name of false patriotism incites consumers to boycott certain products, the chain of profit in the background is anything but simple.

[He] was at all times indignant against that false patriotism, that pretended love of freedom, that unruly restlessness, which is inconsistent with the stable authority of any good government.

In reality, Samuel Johnson was nothing short of a patriot. A patriot, in the true sense of the word, must draw a hard line against those scoundrels who damage the nation in the name of false patriotism. Johnson believed that the effect of hypocrisy on the pursuit of freedom was only to destroy the stability of political systems and create chaos. Adding to this idea, he said, “patriotism is the last refuge of a scoundrel.”

By my understanding, the kind of patriotism that fills its ranks with scoundrels is shameful, whether it be due to ignorance, weakness, or hypocrisy.

Translation by Heidi. Read more of Tang Yinghong’s musings, as translated by CDT.