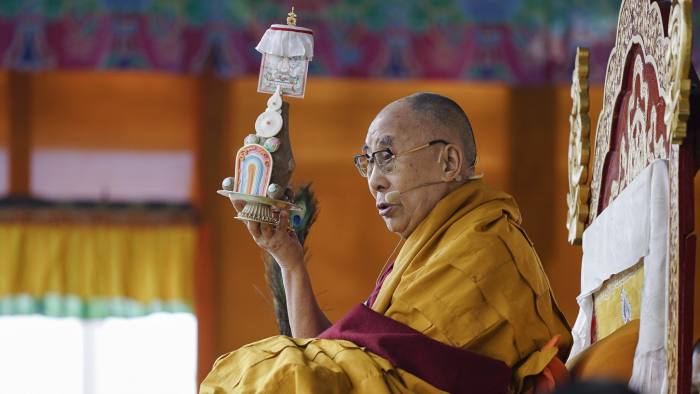 The 14th Dalai Lama today reached Tawang, a small Himalayan district which while historically part of Tibet, is today administered by Arunachal Pradesh, India, a border region largely claimed by Beijing. In recent months, Beijing has been increasingly vocal in its opposition to the ongoing trip—the Dalai Lama’s first since 2009 to the region where he rested after fleeing China in 1959. This week, China Daily published an editorial urging “Beijing […] not [to] hesitate to answer blows with blows” for New Delhi allowing the Dalai Lama to “visit Southern Tibet, a historical Chinese territory India has illicitly occupied.”

The region has also long been considered a candidate for the birthplace of the next Dalai Lama, an eventuality that in recent years has become increasingly uncertain. Since 2014, the aging Dalai Lama has repeatedly suggested that he could be the last incarnation in a centuries old political and spiritual tradition; Beijing has countered by asserting its right to name his successor. At The New York Times, Ellen Barry reports on Tawang’s historic relevance to Tibetan Buddhism, on the Dalai Lama’s ongoing visit to the region, and on the political motives that an expert sees in the trip:

At stake on this journey, scholars said, is the monumental question of who will emerge as the Dalai Lama’s successor — and whether that successor, typically a baby identified as the next reincarnation of the Dalai Lama, will live inside or outside China’s zone of influence.

[…] Tawang is home to the Monpa people, who practice Tibetan Buddhism and once paid tribute to rulers in Lhasa, 316 miles to the north. Though the town’s population is about 11,000, officials said they were expecting as many as 60,000 to gather for the Dalai Lama’s appearances at Tawang’s monastery this weekend.

[…] The most treasured lore among the Monpa surrounds Tsangyang Gyatso, who in 1682 became the sixth Dalai Lama. People here make pilgrimages to his childhood home, where a stone is displayed with a faint footprint said to be his, and speak longingly of the possibility that it could happen again.

“That is the dream of many people here, that the next Dalai Lama should be born in Tawang,” said Sang Phuntsok, Tawang’s deputy commissioner. […]

[…] Aging Tibetan Buddhist lamas have, in some cases, visited places where they would later be reincarnated as babies, and the Dalai Lama’s visits to Tawang and Mongolia seemed to fall into that pattern, said Robert J. Barnett, a historian of modern Tibet at Columbia University.

“This is a way of getting under the skin of the Chinese, of probing them, and reminding them that they have no control over where the next reincarnation occurs,” he said. [Source]

If “getting under the skin” of Beijing was the Dalai Lama’s main objective, he appears to have succeeded. Chinese Foreign Ministry Spokesperson Hua Chunying fielded several questions about the visit in her April 6 regular press conference. After a first question regarding Beijing’s plan to protest New Delhi’s invite (protest has been formally lodged, she said), Hua explained how Beijing views the situation as a questioning of the “one-China policy”:

[…] Q: Is China’s objection to Dalai Lama’s visit to the “Arunachal Pradesh” driven by the view that India is questioning the one-China principle by inviting the Dalai Lama?

A: I want to stress once again that on major issues concerning China’s territorial sovereignty and national security, China’s position is consistent. The boundary question and Tibet-related issues bear on China’s core interests. By extending an invitation to the Dalai Lama and approving his activities in the disputed eastern section of the China-India boundary, the Indian side has breached its commitment on Tibet-related issues, further escalated the boundary dispute, and undermined mutual trust and relations between China and India. The Chinese side opposes the Dalai Lama’s visit to the disputed area and any country’s provision of venues for his anti-China separatist activities. As I have said, the Chinese side has lodged stern representations with the Indian side in Beijing and New Delhi respectively. We urge the Indian side to stop its erroneous act of using the Dalai Lama to harm China’s interests.

[…] Q: You just said that other countries should respect China’s core interests. Media reports say that the reason why India invited the Dalai Lama to the “Arunachal Pradesh” was because China did not respect India’s core interests in issues such as joining the Nuclear Suppliers Group (NSG). What is your comment on that?

As for India’s application for the NSG membership, the Chinese side has elaborated on its position many times. It is a multilateral issue that should be resolved by all NSG members through consultation. The Chinese side supports NSG members in working out, on the basis of thorough discussion, a non-discriminatory solution that is applicable to all non-NPT states through open and transparent inter-governmental procedures. [Source]

For its part, New Delhi has denied that the Dalai Lama’s visit to Arunachal Pradesh is politically significant. The Hindu notes that China Daily’s editorial also evoked the one-China policy, drawing a parallel between Tibet and Taiwan, and also quoted from a Reuters interview with a top Arunachal Pradesh official sure to raise hackles in Beijing:

“New Delhi not only allowed the 14th Dalai Lama to visit Southern Tibet, a historical Chinese territory India has illicitly occupied and refers to as ‘Arunachal Pradesh’, but the spiritual leader of ‘Tibetan independence’ was also escorted on the trip by India’s junior minister of home affairs. To Beijing, that is a double affront,” the [China Daily] edit[orial] said.

[…] The daily took exception to remarks by the Minister of State for home affairs, Kiren Rijiju that, “China should not object to the Dalai Lama’s visit and interfere in India’s internal affairs.”“(Mr.) Rijiju might think himself cute in borrowing a line from Beijing’s diplomatic representations, but he has ignored the fundamental distinction here: Like Taiwan and any other part of China, Tibet is a part of Chinese territory no matter whether New Delhi agrees or not. Southern Tibet, on the other hand, was stolen from China by his country’s former colonial master taking advantage of China’s internal strife.”

Earlier in an interview with Reuters, Pema Khandu, Chief Minister of Arunachal Pradesh was quoted as saying that ,“As far as the boundary issue is concerned, I have also maintained that we don’t share our boundary with China, but we share our boundary with Tibet”. Analysts say that the statement can be interpreted as questioning the “One-China” principle. [Source]

Recently, Beijing has been situating its controversial choice for the Panchen Lama—the second highest cleric in the Gelugpa sect of Tibetan Buddhism overseen by the Dalai Lama—into a higher profile. Last summer, the controversial young cleric oversaw a Kalachakra initiation ceremony in Shigatse, marking the first time the tantric ritual had been held in Tibet since the Dalai Lama left in 1959. More recently, Beijing’s Panchen Lama urged monastic Tibetans to “love the Party.” The boy that the Dalai Lama identified as the 11th Panchen Lama in 1995 disappeared, and Beijing installed its own choice. While Chinese authorities claim that the disappeared Panchen Lama is “living a normal life and wishes not to be disturbed,” calls for the disclosure of his whereabouts  continue to resound.

Beijing’s intervention in Tibetan Buddhist affairs—a right it claims to have inherited from its imperial predecessors—reflects an assertive attitude that critics see as exacerbating tensions with ethnic and religious minorities, particularly in Tibet and Xinjiang.