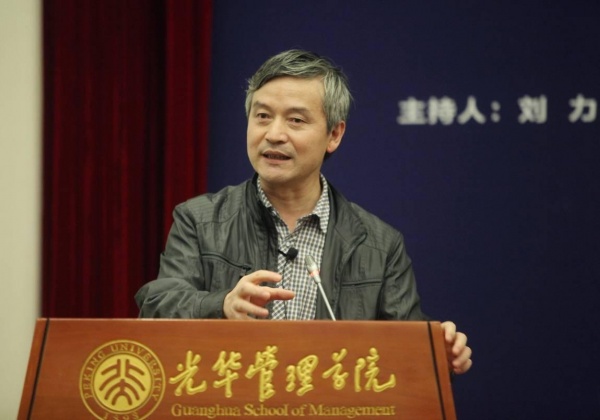 Peking University law professor He Weifang has long been prominent as a liberal voice in China, both on social media and in comments in foreign news reports. His prominence has also made him a target of online attacks and account deletions. This week, He announced that he would no longer resist these bans by “reincarnating”:

Today, my second WeChat public account was deleted, only three days after I’d opened it. While strongly protesting this, I have decided not to start a new one. I’ve been blocked from Sina Weibo, can’t update my blog, and now even my mild-mannered public account has met an untimely end—so this is what the “Confidence Doctrine” is all about! They can slit the throats of every rooster in the world, but the sky will still brighten. Let’s just sit and wait for the dawn! [Chinese]

The AP’s Gerry Shih reports on He’s decision to end his online presence amid an ever-chillier climate for alternative voices under Xi Jinping:

He, a famed law professor at elite Peking University and key defender of imprisoned Chinese Nobel Peace Prize laureate Liu Xiaobo, is the latest public intellectual to throw in the towel in President Xi Jinping’s China. Over the past half-decade, freedom of speech and other civil liberties have been rolled back while a radical movement devoted to the People’s Republic’s authoritarian founder Mao Zedong has flourished.

“I feel utterly helpless,” He said by telephone. “It’s as if I’m not allowed to make a single sound.”

[…] Over the past five years, however, He has come under relentless attack online from defenders of the ruling Communist Party and even more extreme Maoists who’ve held public demonstrations denouncing He’s liberal views, which are considered “rightist” on China’s political spectrum. His speaking engagements dried up three years ago after the Global Times, a party-run newspaper with a leftist bent, reported critically on a lecture he delivered to retired party cadres in southern China, essentially ruling him out of the lecture circuit.

“In the last 40 years, freedom of speech for intellectuals has never been constricted as severely as it is now,” He said. “It makes you outraged.” [Source]

He has reportedly chosen not to turn to Western social media instead because they are inaccessible to most people in China. He has announced his departure from social media before, posting in 2013 that “it’s time to close this [Sina] microblog. Goodbye.” In that case, too, he cited discomfort at the intensity of attacks against him as a reason for his departure. Episodes like the fierce backlash against student Yang Shuping for her negative comments about China in a University of Maryland commencement speech suggest that the use of platforms outside China may offer little protection against such reactions in any case.

News of He’s silencing prompted gloom on Twitter. George Washington University’s Donald Clarke described his announcement as “very depressing”; Ira Belkin of NYU’s U.S.-Asia Law Institute commented that “we need to hear more, not less, from He Weifang”; and ChinaFile editor Susan Jakes wrote that “if He Weifang is forced to go silent, China loses one of its most principled, insightful and patriotic voices.”

For now, He still seems willing to talk to foreign media. As Yaqiu Wang wrote for the Committee to Protect Journalists in February, many others are not, either because of direct official pressure or for fear of being seen as colluding with “hostile foreign forces.”

According to Shih, He traces his current troubles to his comments on a clause in China’s nascent civil code which makes damaging “the name, likeness, reputation or glory of heroes and martyrs” a punishable offense. Noting the lack of any legal standard for identifying such figures, as well as widespread doubts about the truth of official histories, He wrote, according to The Wall Street Journal: “To uncover the true face of history in the spirit of seeking truth from facts, but to instead face accusations of malicious slander, that is horrifying. Real gold fears no fire, true martyrs have no need to worry about ‘being smeared.’ All their defenders need to do is present definitive evidence to back their claims. What are they afraid of?”

The civil code clause is part of an aggressive campaign to promote officially approved versions of history over so-called “historical nihilist” challenges. Other maneuvers have included last summer’s takeover of the traditionally liberal journal historical Yanhuang Chunqiu; court judgments against a former editor of the publication, Hong Zhenkuai, for questioning a legendary act of revolutionary heroism, and against blogger Sun Jie or Zuoyeben for joking about the deaths of two other Communist martyrs; and the conviction of two men for selling books including “How The Red Sun Rose,” a critical history of the Party before it won power.

Public attitudes towards treatment of revolutionary heroes appear starkly divided from the reaction to a recent viral video. From Oiwan Lam at Global Voices:

The boy was reading the textbook in a “crying tone”, a recital skill widely taught in schools, and ended up bursting into tears while his classmates burst into laughter. Below is a copy of the clip, via YouTube:

Reactions to the video were divided. Some were touched by the child’s patriotic spirit, while others accused China’s system of brainwashing.

Born in 1932, Lui Hulan participated in the Chinese Communist revolution when she was a 10-year-old and joined the party in 1946. She assisted the CCP in the assassination of her village chief in Yunzhouxi, Shanxi province and was beheaded by the Kuomintang soldiers in January 1947, when she was just 15. [Source]