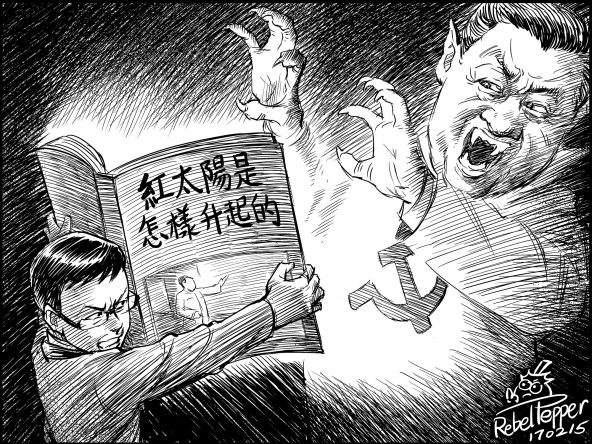 Cartoonist Rebel Pepper comments on the case of Guangxi Normal University Press social media editor Dai Xuelin, who received a five-year prison sentence earlier this month for running an “illegal business operation.” Dai and his business partner Zhang Xiaoxiong, who was sentenced to 3.5 years, had been independently distributing unauthorized books from Hong Kong and Taiwan. Their case was reportedly handled by the same Ningbo police who pursued one of their sources, the five Causeway Bay booksellers who went missing in late 2015. Dai holds a copy of “How The Red Sun Rose,” one of the books he was prosecuted for selling: a history of the civil war-era Communist Party by former Nanjing University professor Gao Hua, who died in 2011. The book is published in English by Hong Kong’s Chinese University Press, which describes it as follows:

This work offers the most comprehensive account of the origin and consequences of the Yan’an Rectification Movement from 1942 to 1945. The author argues that this campaign emancipated the Chinese Communist Party from Soviet-influenced dogmatism and unified the Party, preparing it for the final victory against the Nationalist Party in 1949. More importantly, this monograph shows in great detail how Mao Zedong established his leadership through this party-wide political movement by means of aggressive intra-party purges, thought control, coercive cadre examinations, and total reorganizations of the Party’s upper structure. The result of this movement not only set up the foundation for Mao’s new China, but also deeply influenced the Chinese political structure today. [Source]

Chinese authorities have been waging an intense campaign against unapproved history or “historical nihilism,” including the takeover last summer of the formerly liberal journal Yanhuang Chunqiu.

RFA notes that the former head of Guangxi Normal University Press, who had published and sold “How The Red Sun Rose” on the mainland, was detained for alleged bribery last May. The U.S.-backed broadcaster also spoke with Shenzhen-based author Tian You, who said he had been detained for five days over the past year. “I just criticized their stupidity by saying that nobody would pay any attention to those books if they just allowed them to go on sale,” Tian said. “As soon as they start arresting people, they are pretty much doing the selling for them, aren’t they?”