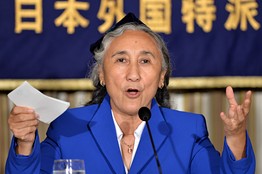 Human rights NGO Amnesty International has released an “urgent action” call for the release of as many as 30 relatives of U.S.-based Uyghur human rights activist Rebiya Kadeer that the organization says have been arbitrarily detained. Reuters’ Ben Blanchard reports on Amnesty’s call, providing context on Rebiya Kadeer’s activism and the ongoing security crackdown in Xinjiang:

It was not possible to independently verify the report.

Xinjiang, where hundreds have died in recent years in violence between majority Han Chinese and ethnic Uighurs who call Xinjiang home, is under tight security and independent reporting there is difficult.

[…] A Xinjiang government news department official declined to comment, saying she was unaware of the report. China’s foreign ministry did not immediately respond to a request for comment.

Kadeer is a former political prisoner in China accused of leaking state secrets in 1999. She was later allowed to leave on medical grounds and lives in the United States. She is president of the World Uyghur Congress. [Source]

Amnesty’s call lists Rebiya Kadeer’s son Ablikim Abudureyim among those believed to be under arbitrary detention in Xinjiang. Ablikim Abudureyim had previously spent 12 years in prison where he was was allegedly subject to repeated torture and solitary confinement until his release in 2015.

China has been known to target critical Uyghur voices abroad by exerting pressure on their China-based family members. In 2014, three brothers of U.S.-based Uyghur journalist Shohret Hoshur were detained. In 2015, Reuters reported on the lengths that Beijing has taken to infiltrate and intimidate overseas Uyghur dissidents.

Over the summer, China demanded that Uyghur students studying abroad in Egypt and other Muslim-majority countries return home; those who obeyed were detained upon return, and several dozen who didn’t in Egypt were detained in Cairo. Coverage from the Financial Times quoted Amnesty’s William Nee saying that this was an attempt by Beijing to “suppress any type of Islam they don’t directly control.” Last month, The Globe and Mail’s Nathan VanderKlippe—who himself was briefly detained on a reporting trip to Xinjiang in August—reported that the pressure felt by Uyghur students in Egypt “was just one part of a broad campaign to increase pressure on Uyghurs overseas that has touched numerous countries”:

[…] Chinese authorities have exerted heavy pressure on Uyghurs, restricting travel, inspecting cellphones and installing an increasingly capable surveillance regime that employs facial recognition to track people. This year, authorities have also taken away numerous Uyghurs for re-education – in a bid to rid them of religious and political beliefs deemed unhelpful or dangerous.

The overseas pressure has stemmed from the same effort, students and activists believe. Those who return home often vanish, raising suspicions that they, too, have been sent for re-education.

China wants Uyghurs “closer to home, where they can be more carefully monitored,” said James Leibold, a specialist in Chinese ethnic policy at La Trobe University in Australia. The acuteness of the pressure this year appears to be related to a desire for stability ahead of the Communist Party congress that just ended in Beijing.

[…] The Globe and Mail spoke with one Uyghur student who studies in Canada. The student’s family was told this year to bring their child home, although authorities relented when the student provided documentation showing a valid study-abroad visa and enrolment in a program unrelated to religion. […] [Source]

Since 2014, Xinjiang has been the “frontline” of a nationwide crackdown on terrorism in response to rising incidents of violence in the region and elsewhere in China. The crackdown in Xinjiang has seen tight security measures, the implementation of cutting-edge surveillance technology, and the mandatory installation of spyware on mobile phones; and has also included policies that appear to target Uyghurs such as selective religious fasting bans, local and region-wide rules against “extremist behavior” including face veils or long beards, and a ban on “extreme” Islamic baby names. A recent report from the Financial Times’ Emily Feng notes that over the past year “thousands have been sent to unmarked detention centres,” like the ones Amnesty believes relatives of Rebiya Kadeer to currently be held in, and also notes unease rising among Han Chinese residents amid the increasing surveillance.

On Twitter, Xinjiang-focused historian David Brophy has been sharing scenes from a trip to Xinjiang:

Ubiquitous scene on the streets of #Xinjiang these days. Men & women (inc. the elderly) trudging around with enormous clubs, part of the "People's War" on terrorism. pic.twitter.com/GidMeN2Vct

The religion shelves in the Uyghur section of one of Ürümchi's main bookshops. Books must be either extremely popular, or extremely banned. pic.twitter.com/kdmjQk4xFM

Temporarily unstaffed checkpoint in Kashgar. Police wave Chinese through on the green lane to the left, while Uyghurs queue up in the blue lane to the right. #racism pic.twitter.com/5dl7A3J75g

Bit hard to make out, but there's a man with a sledgehammer demolishing the dome on this half-built building in Khotan 和田, because it looks too "Islamic" #Xinjiang pic.twitter.com/hclndmP3ww

Surveillance cameras set up throughout #Xinjiang mosques, plus portraits of Xi Jinping aligned with the mihrab, meaning that worshippers pray facing him pic.twitter.com/FdIPAe5i9M

Similarly, the South China Morning Post’s Nectar Gan reported this week that Christians in an impoverished county in rural Jiangxi have been subject to a poverty-relief campaign urging them to replace portraits of Jesus with those of Xi Jinping.