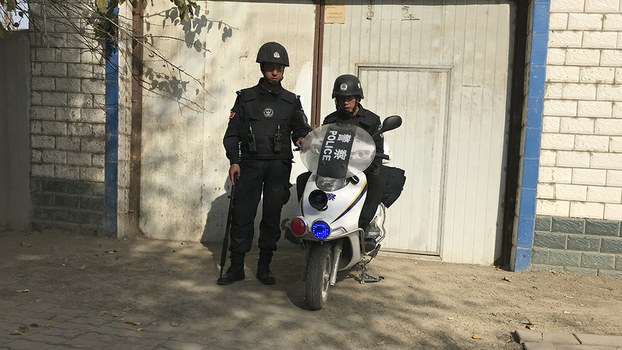 U.S. Senator Marco Rubio and Representative Chris Smith have sent a letter urging Ambassador to China Terry Branstad to launch an investigation into the reported mass detention of Uyghurs in political re-education camps, and into widespread surveillance and rights repression in Xinjiang. At The Washington Post, Simon Denyer reports, noting a subsequent response statement from the U.S. Embassy in Beijing:

Rubio and Smith cite credible media reports that between 500,000 and 1 million Uighurs have been sent to these centers for months of “political indoctrination” — calling it the largest mass incarceration of a minority population in the world today.

[…] Among those rounded up are dozens of family members of six journalists from the Washington-based Radio Free Asia, who have reported on the deepening crackdown in China’s western region of Xinjiang, officially known as the Xinjiang Uighur Autonomous Region (XUAR).

[…] They cited reports of deaths and torture in the detention centers. They also raised alarms over a digital surveillance system in the region so pervasive that every aspect of daily life is monitored, through facial recognition cameras, mobile phone scans, DNA collection and an extensive and intrusive police presence.

[…] The embassy, in a emailed statement on Thursday, said it was “concerned” by the reports of the detentions of the reporters’ relatives, and was “deeply troubled” by reports of the deepening crackdown on Uighurs and other Muslims in China. Branstad has raised these concerns with the Chinese government, the embassy said.

“We call on China to release all prisoners of conscience, and to respect the human rights and fundamental freedoms of all its citizens,” it said. [Source]

An ongoing security crackdown in Xinjiang, launched in May 2014 and quickly extended, has mostly targeted the Uyghur ethnic minority native to the region. Rights advocates and overseas Uyghur exile groups blame the ever-escalating campaign for exacerbating ethnic tensions and further destabilizing the region. The crackdown has included religious fasting bans, local and region-wide rules against “extremist behavior” including wearing veils or beards, propaganda campaigns, a ban on “extreme” Islamic baby names, and more recently a biometric data collection system, and use of political re-education camps. Radio Free Asia, who have been closely covering the long-running crackdown, has reported that family members of staff have been rounded up and sent to the camps, an apparent effort to dissuade the organization’s continued coverage of the region—a tactic that Chinese authorities have used for years. Reporting on the US lawmakers’ call, RFA provides further information on the re-education camps:

Since April 2017, Uyghurs accused of harboring “strong religious views” and “politically incorrect” views have been jailed or detained in political “re-education camps” throughout Xinjiang, where members of the ethnic group have long complained of pervasive discrimination, religious repression, and cultural suppression under Chinese rule.

China’s central government authorities have not publicly acknowledged the existence of re-education camps in Xinjiang, and the number of inmates kept in each facility remains a closely guarded secret, but local officials in many parts of Xinjiang have in RFA telephone interviews forthrightly described sending significant numbers of Uyghurs to the camps and even described overcrowding in some facilities.

Maya Wang of the New York-based Human Rights Watch told The Guardian in January that estimates of Xinjiang residents who had spent time in the camps went as high as 800,000, while at least one Uyghur exile group estimates that up to 1 million Uyghurs have been detained throughout the region since April 2017, and some Uyghur activists say nearly every Uyghur household has been affected by the campaign.

Among those in custody are dozens of family members of RFA Uyghur Service reporters, whose detentions Rubio and Smith said serve to “intimidate the families of U.S. government employees and undermine some of the most effective reporting from within the XUAR.” [Source]

Senator Rubio and Representative Smith, who chair and co-chair the Congressional-Executive Commission on China, respectively, also called on Ambassador Branstad to use information gathered towards considering the levying of sanctions under the Global Magnitsky Act. Coverage from the Unrepresented Nations and Peoples Organization describes the act, and quotes a Uyghur-American attorney on the significance of the letter:

The lawmakers also called on the U.S. Embassy in Beijing to begin compiling “relevant information regarding specific XUAR officials responsible for the arbitrary mass detention and abuse of Uyghurs for possible sanctions under the Global Magnitsky Act.”

The Magnitsky Act enables U.S. officials to freeze any U.S. assets held by those sanctioned, and to bar them from entry into the United States.

Nury Turkel, a Uyghur-American attorney and former president of the Washington-based Uyghur American Association (UAA) exile group, told RFA’s Uyghur Service that the letter “demonstrates the growing interest of the U.S. Congress in the worsening human rights situation for Uyghur people in China.”

“Requesting our embassy in Beijing to collect information on the human rights abusers and to sanction them under the Global Magnitisky Act would send a powerful message to those Chinese officials orchestrating and implementing the cruel and degrading treatments that the Uyghur people have been subjected to,” he said.

“Ambassador Branstad should fulfill the promises that he made during his confirmation hearing, that he would work to improve the human rights situation in China.” [Source]