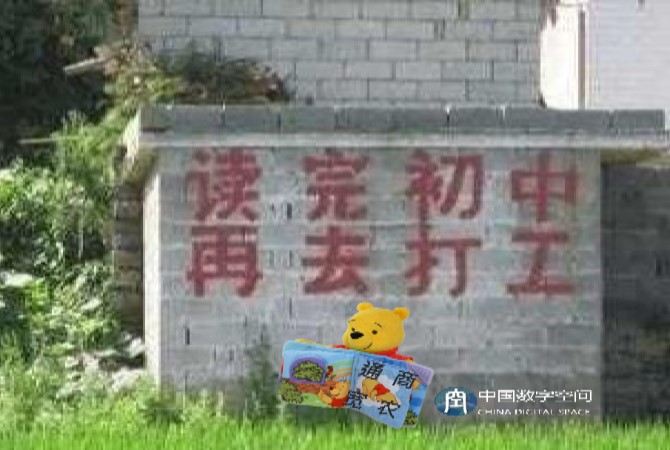 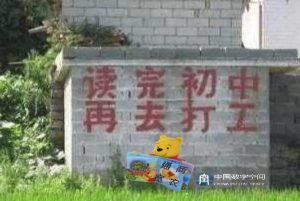 Winnie the Pooh, a cartoon character that has been used to criticize Xi, sits under a stenciled slogan reading “after finishing junior high, I’ll go back to work.” The book that Winnie is reading has the characters for “facilitate commerce and loosen clothing,” a reference to a high-profile 2016 gaffe by Xi. (Source: CDT)

Xi Jinping’s secondary education was cut short by Mao Zedong’s Great Proletarian Cultural Revolution, which began in 1966, when Xi was 13 years old. At the time, Xi was a student at the Beijing Bayi School, a boarding school with a student body mostly made up of children of high-ranking Party members. When that school was shut down, he began attending the No. 25 school, but social order quickly dissolved amid the pandemonium of the Cultural Revolution. By 1968, Xi’s father Xi Zhongxun had been denounced and imprisoned, and his older half sister Xi Heping had been “denounced to death.” Xi was forced to rely on himself for survival, which took priority over diligent study. From 1969-1975, beginning when Xi was 16 years old, he became a “sent-down youth,” sent to live in a cave and toil with the peasants in Liangjiahe, a small village in rural Shaanxi province. (Xi’s time in the country generated mythic stories that have been used to fuel an ongoing state media image-crafting campaign, such as a CCTV segment that included Xi claiming: “No matter the job I’d do it. I’d carry 200 jin [about 240 pounds] of wheat on a ten li [over three miles] mountain road without even switching shoulders.”)

From 1975 to 1979, Xi studied chemical engineering at Tsinghua University as a “Worker-Peasant-Soldier student,” a class of student from the late Mao years whose higher education was focused more squarely on Marxist ideology and Chinese Socialism than on academics. In 2002, Xi obtained a Doctor of Law degree (LL.D.) from Tsinghua, but the validity of the degree has been questioned, stemming from allegations that Xi’s dissertation was written by a group of helpers in an effort to burnish his credentials.

Mao Zedong’s onetime secretary Li Rui in 2018 was quoted by Voice of America’s Mandarin service decrying Xi’s “low education.” Speaking of the last time he spoke with Xi, Li said, “When did I last meet with Xi Jinping? When he was secretary of the Zhejiang Provincial Committee of the Communist Party of China. … His level of education was so low.”

Xi’s detractors have coined the nickname “junior high schooler” to highlight Xi’s interrupted and controversial secondary and post-secondary education, and to indicate skepticism that his later under- and postgraduate studies at Tsinghua University were more than a fig leaf afforded by his political pedigree and used to justify his current rank. The name is often applied to Xi following high profile public gaffes, such as an error in a speech last year when he accidentally said “loosen clothing” instead of “be lenient to farmers.” At Language Log, The University of Pennsylvania’s Victor Mair described the error as a “horrendous gaffe” which “even someone with a middle school education should not have made”.