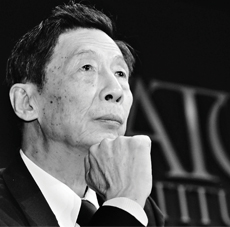 On Tuesday, one of China’s last remaining liberal think-tanks, Unirule, was evicted from its Beijing offices. The leasing company even went as far as to weld the office doors shut, temporarily imprisoning the employees in an act that serves as a fitting metaphor for the increasing restrictions on political discourse under Xi Jinping. Unirule’s Director, Sheng Hong, posted this video:

今天下午四点半左右，爱家营公司派了几个工人，公然用铁栅栏将天则所办公室的门焊死，并锁上。
The letting agent ordered workers to block the doors of the Unirule's office at 4:30 this afternoon. pic.twitter.com/JkA8YeFI06

The extra flourish of welding–– not merely just locking––the doors shut feels like the final nail in the coffin for space to discuss anything other than XJP Thought. https://t.co/Og9aVpWPjL

South China Morning Post’s Nectar Gan provided background to the eviction, and who director Sheng Hong thinks is behind it:

The organisation’s property dispute began in March, when the agent, acting on behalf of the landlord, ordered it to vacate the offices on the grounds it was using a residential property for commercial purposes.

Unirule said the agent has no right to terminate the contract on such grounds, as a supplement to the lease signed by both parties clearly states that the two flats are to be used as offices.

[…] “It must be the pressure from the government,” Unirule director Sheng Hong said of the events of Tuesday and Wednesday.

“The authorities do not want [to tolerate] a different voice, but they do not want to brazenly shut us down either, because that would make it look too terrible.

“They obviously want to try to turn it into a civil dispute, but people are not idiots and everyone can tell what’s the real matter here – the agent does not have the ability or motive to do this,” he said. [Source]

Founded in 1993 by liberal economist Mao Yushi, Unirule has a history of disagreement with the CCP. In 2009 it successfully fought for the suspension of a legal amendment that would have expanded government land control. In 2012, Mao won the Milton Friedman Prize for Advancing Liberty from the U.S.-based Cato Institute, a free-market think-tank. The South China Morning Posts’s Wendy Wu and Jane Cai reported in 2017 on Unirule’s website shutdown, and Mao’s previous clashes with Beijing:

[…] The cyberspace administration said the websites were closed down because of various serious violations, including providing internet information services without proper licences, displaying pornography and publishing unverified information to solicit contributions.

[…] In 2011, Cai­xin.com published an article of his criticising late leader Mao Zedong. The article was removed quickly but triggered a wave of attacks on the economist by Maoist leftists. [Source]

Assessing how Unirule has still not been entirely shut down, Mao acknowledges his age and prestige help: “If it was someone else speaking, they would probably be arrested. But to me, the government is polite.” In a recent interview with Ian Johnson at the New York Review of Books, Tsinghua University Professor and former guest speaker Gu Yuhua spoke of her difficulties in organizing her Unirule talk:

It almost didn’t happen. Just before I left, I got a call from the university saying, “Don’t go.” I asked why, and they said, “It’s really complicated here.”

I said, “What kind of a reason is that?” [Laughing.]They said, “We’ve received an order from above that you’re not allowed to attend.” I said, “Explain your viewpoint more clearly.” They just said, “It’s complicated, it’s complicated.” I said, “OK, your duty is to inform me. You’ve fulfilled that duty. Whether I go or not is my responsibility.”

Even Unirule is in trouble. They used to be [centrally located] at the Chongwen Gate. Now they’re out in [the suburbs of] Haidian Balizhuang. It’s in a small residential community. The gateway was full of security guards. They wouldn’t let me go into the building.

I said, “Stop it,” and they said, “Well, at least register and give your phone number.” So I did. [Source]

Unirule’s eviction is just one of many difficulties it and other think-tanks have endured since Xi came into power in 2012, as the New York Times’s Chris Buckley writes:

Since then [2012], liberal Chinese academics and writers have become increasingly marginalized, and denied chances to lecture or publish. Publications, groups and websites that served as platforms for unorthodox views have closed or retreated to safer topics.

In 2016, loyalist party officials took control of Yanhuang Chunqiu, a monthly history magazine that had been a flagship for liberal intellectuals and retired officials. In 2013, the Transition Institute, another adventurous think tank in Beijing, was shut by the government; its founder, Guo Yushan, was detained in 2014 and held for nearly a year. [Source]

Writing in 2017, The Economist saw the Yanhuang Chunqiu saga as the beginning of the CCP’s “onslaught against liberal forums” in the run-up to the National People’s Congress that year, explaining Xi’s motives for the shutdowns:

The magazine’s founding publisher, Du Daozheng, said the purge reminded him of the Cultural Revolution, when radical Maoists seized control of a newspaper for which he then worked, and berated him as a “counter-revolutionary”.

[…] [Xi Jinping] professes himself to be in favour of market-oriented reform and upholding constitutional rights, and his late father supported Yanhuang Chunqiu; yet he is nervous of liberal views. Unirule has been one of the country’s most prominent independent think-tanks since it was founded in 1993. David Kelly of China Policy, a Beijing-based consultancy, says the institute “cannot be said to be unorthodox, subversive or dissident in any obvious way”. He notes that pro-market reform measures that were proposed by Mr Xi in 2013 echoed those suggested by Unirule years earlier.

But these are tense political times in Beijing, as the Communist Party prepares for a five-yearly congress in the autumn and a sweeping reshuffle of its leadership (not including Mr Xi’s positions) immediately after it. Mr Xi does not want anyone to embarrass him amid the political horse-trading of the months ahead. Websites run by diehard Maoists, dripping with criticism of free markets, are still allowed to operate. But Maoists, at least, can be counted on to support the party. Mr Xi seems to fear that moderate liberals may rattle it.

[…] Whether the pressure on liberals will be eased after the party congress will depend largely on how secure Mr Xi feels. [Source]