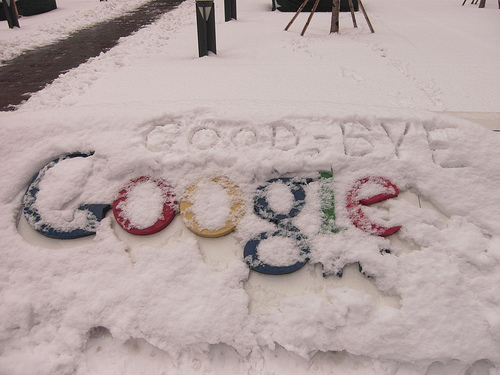 Eight years ago, Google refused to continue its four-year long practice of censoring search results for Chinese users and subsequently pulled out of China. Now, leaked documents show that Google has been stealthily building in-roads back into China for over a year with its Project Dragonfly, which features a custom Android app for Chinese users that will censor terms deemed unacceptable to the Chinese government, and could be launched in the next six to nine months. Ryan Gallagher at The Intercept reports:

[…] Documents seen by The Intercept, marked “Google confidential,” say that Google’s Chinese search app will automatically identify and filter websites blocked by the Great Firewall. When a person carries out a search, banned websites will be removed from the first page of results, and a disclaimer will be displayed stating that “some results may have been removed due to statutory requirements.”

[…] The search app will also “blacklist sensitive queries” so that “no results will be shown” at all when people enter certain words or phrases, the documents state. The censorship will apply across the platform: Google’s image search, automatic spell check and suggested search features will incorporate the blacklists, meaning that they will not recommend people information or photographs the government has banned.

[…] In December 2017, sources say [CEO Sundar] Pichai traveled to China and attended a private meeting with Wang Huning, a leading figure in the Communist Party. Huning is President Xi’s top foreign policy adviser and has been described as “China’s Kissinger.” Pichai is said to have viewed the meeting as a success. The same month, Google announced that it was launching an artificial intelligence research center in Beijing. That was followed in May 2018 with the release of a Google file management app for Chinese internet users. Then, in July, Google rolled out a “Guess The Sketch” game on WeChat, a popular Chinese messaging and social media platform.

The finale would be the launch of the search app — the Dragonfly project. According to sources familiar with the plans, timing for the app’s release will depend on two main factors: approval from the Chinese government and confidence within Google that its app will be better than the search service offered by its main competitor in China, Baidu. [Source]

As with its recent partnership with the Defense Department on Project Maven, Google’s move has aroused internal dissent. According to reports from the New York Times, some employees either chose to transfer to different divisions or quit entirely, stating this violated Google’s past commitments to stand against Chinese censorship. The New York Times’ Li Yuan goes on to detail several potential implications of Google’s decision:

For Google, China is an increasingly difficult market to navigate. The Chinese government has tightened internet censorship significantly since President Xi Jinping came into power five years ago. Companies need a great deal of resources to meet the censorship demands imposed by the government, and failing to do so can be serious. In the first half of 2018, China’s national internet regulator shut down or revoked the license of more than 3,000 websites.

Google is a household brand in much of the world, but its name may draw blank stares from China’s younger generation who are growing up in the post-Google Chinese internet. Winning these people will be an uphill battle for Google, especially if it cannot differentiate itself much from Baidu. [Source]

2)Internet regulators can summon Google and Facebook executives for criticism sessions all the time. Their CEOs will need to write self-criticism letters and post them on their websites. Ask the CEOs of Bytedance and Kwai how they did it.

4) An exec at an internet giant once told me that their AI speaker could be much better if they didn’t have to spend so much time on censoring sensitive stuff. Try to ask any Chinese AI speaker, “Who is Xi Jinping.” All of a sudden, they won’t be so smart.

State-affiliated tabloid Global Times has also drawn attention to the likely difficulties Google may have meeting regulatory requirements if they do re-enter the Chinese market:

There is a possibility that Google can re-enter the Chinese market with what is reported to be a “censored version of the search engine,” but it will be a huge challenge for Chinese regulators due to the lack of a relevant supervision mechanism, said an analyst.

The comment came after media reports that Google plans a censored version of its search engine for China that blocks certain search terms.

[…] Google may re-launch its censored search engine in China, but the key differentiation lies with what powerful local partnership it may establish, and how influential and experienced the partner, or joint venture, is at managing compliance, Chris Dong, global research director at technology advisory firm IDC China, told the Global Times on Thursday. [Source]

Google’s move may also prove detrimental to the U.S.’ slimming comparative advantage in the global AI race. From Pete Sweeney at Reuters:

And search is just the appetizer: the government could follow up by unblocking Google’s app store, or let it offer cloud services.

Of course, officials are unlikely to let Google wreck local champions. What they want is access to the company’s collective brain. Research from the Eurasia Group showed Google has hired around half of the world’s top AI scientists – a big slice of a finite resource. It is also rolling out AI chips, an area where Beijing is keen to catch up.

Whatever the mutual business interest, China still censors criticism of its human rights record and imprisons dissidents. It is overtly trying to develop local AI champions. Evil or not, following this money might yet backfire. [Source]

Even if Google’s censored search engine does gain a toehold in China, a new report from CSIS reveals it will face a tangled web of new national cybersecurity standards—nearly 300 to be exact—that could subject foreign firms such as Google to give up sensitive IP and source code. Moreover, the report details how cybersecurity standards may be used as a retaliatory tool against foreign firms in the midst of the ongoing trade war, which can potentially affect companies long after tariffs have subsided. In the face of such increasing Chinese government demands, U.S. tech companies lack the luxury of enlisting the U.S. Government’s help, as it may result in tensions that upset the already delicate balance in the diplomatic sphere.

Currently, given the Trump Administration’s relative silence on human rights violations in China, the likelihood of the administration speaking out is even more slim. This raises particularly prickly questions regarding the potential for Google’s complicity in further persecuting oppressed populations in China, such as the Uyghurs in Xinjiang:

So to contextualize this, there are many credible reports of Muslims in western China being sent away to "re-education" camps over having photos on their phones of things like picturesque mosques & women in hijabs. What'll happen when they search a banned term on this Google app?

Google had initially left China with the hopes that Beijing would gradually ease towards a more open internet. However, given that censorship controls have only tightened in the years since, and censors have become increasingly skilled at keeping up with nuanced methods of evading controls, Google’s move back towards the world’s largest internet market may only embolden and legitimize China’s censorship practices, both at home and abroad.

Google’s about-face comes on the heels of increasingly soft resistance to China’s censorship practices, and could be seen as another example in a series of American tech giants bowing to Chinese pressure. On the domestic front, one of the earlier and major signs of complicity came from Cisco Systems, which has been sued multiple times in U.S. court for allegedly knowingly customizing its hardware to be used by the Chinese government’s Golden Shield project to monitor dissidents, sometimes leading to persecution and torture. On the global stage, China’s long arm of influence continues to gain more clout—it has already exported censorship technology to Iran, and has successfully convinced U.S. tech companies to remove content from search results outside of China. This included a request to Google to remove 2,290 items in the first half of 2017, a figure over three times higher than from the preceding six months, and the use of evidence from apps not available in China, such as WhatsApp and Facebook, to convict activists in Chinese court.

In more recent years, Apple, loath to be shut out from the Chinese market, has also succumbed to Chinese government demands. In early 2017, Apple complied with requests to remove English and Chinese versions of the New York Times app from its China-based App Store. A year later, to comply with China’s stringent new cloud computing rules under its Cybersecurity Law, Apple handed over control of iCloud to a state-owned firm in Guizhou, and removed VPN apps from the App Store. To appease the Chinese government’s hardline views on Taiwan, it also has been excluding the Taiwan flag emoji from Chinese iOS devices. Now, Apple is being roundly criticized by Chinese state-run media for its too-soft stance on censoring content such as pornography, gambling, and counterfeit goods on its iMessage service.

In Beijing, the most innocuous campaigns might be the trickiest. Apple under fire over “spam” in iMessage. Translation: China pressuring Apple to scrap encryption https://t.co/IYSYDFHjdX via YJ & @trippmickle

Fellow long-time censored tech giant Facebook has also sought to make inroads back into China, with arguably less success. Journalist Isaac Stone Fish recently argued that if Facebook wishes to succeed, it only has two choices: stay an American company, or become a Chinese one. In 2014, Chinese censors scrubbed reports that the company was seeking to open a sales office in Beijing. In 2016, although Facebook was also considering introducing a censorship tool that would authorize a Chinese third party to automatically prevent posts from appearing in Chinese social media feeds, the project ultimately went unimplemented. In 2017, Facebook released a later taken down photo-sharing app called Colorful Balloons through a local company without listing the app’s parent company. Most recently, for a mere few hours, Facebook appeared to be greenlighted to open a subsidiary innovation center in Zhejiang Province. Paul Mozur at the New York Times describes what happened next:

Then the registration disappeared, and references to the subsidiary were partly censored in Chinese media.

Now the approval has been withdrawn, according to a person familiar with the matter who declined to be named because the person was not authorized to speak on the record.

While the about-face does not definitively end Facebook’s chances of establishing the company, it makes success very unlikely, the person said. The decision to take down the approval, the person added, came after a disagreement between officials in Zhejiang and the national internet regulator, the Cyberspace Administration of China, which was angry that it had not been consulted more closely.

[…] The kerfuffle also illustrates how complicated China’s bureaucracy can be. Foreign companies seeking to expand here must navigate a vast and decentralized government in which provinces, cities and ministries all vie for influence and power. While one part of the government may be happy to support a foreign company like Facebook, that could ruffle feathers elsewhere. Facebook seems to have fallen victim to such a case.

[…] For Facebook, angering officials at China’s internet regulator could make progress particularly difficult, especially as new personnel have just taken over managing the relationship with the Chinese government. [Source]