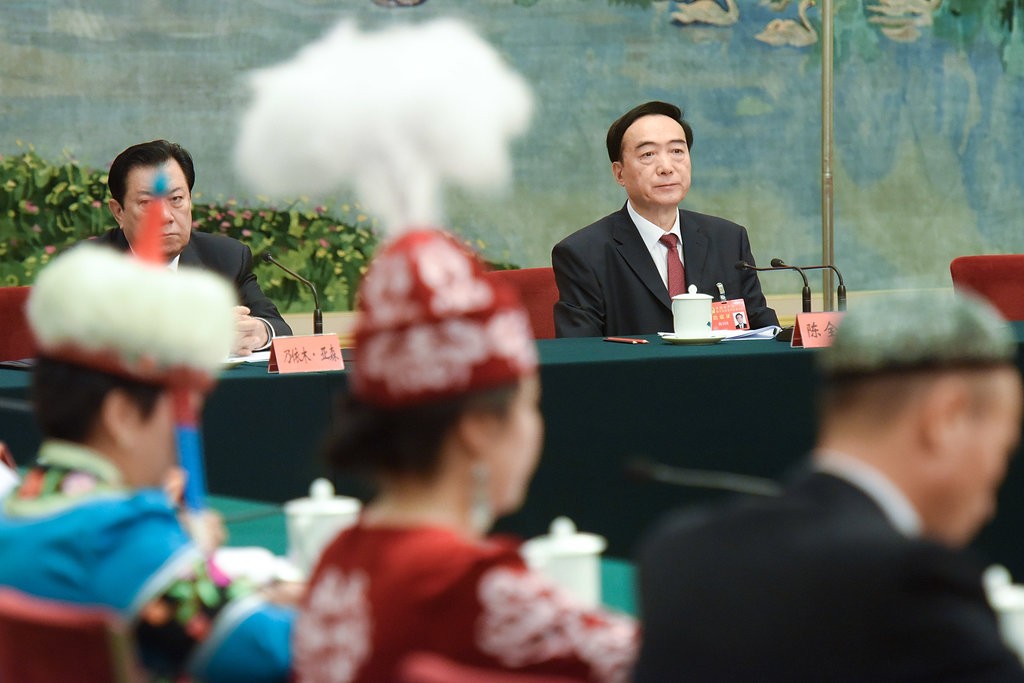 As many as one million Muslims are being held in extralegal political  indoctrination or “re-education” camps in Xinjiang. The camps are part of China’s “strike hard against violent terrorism” campaign that was launched in 2014 in response to a series of violent incidents involving ethnic Uyghur and Han Chinese. While authorities have attributed the violence to Uyghur separatists and religious extremists, critics argue that the state’s repressive policies in the region are the root cause of unrest. Restrictions on Islam have affected all forms of religiosity, including Islamic dress, halal food, and fasting for Ramadan. Last year, officials banned parents from naming their newborns Jihad, Imam, Medina and Mohammed, among other Muslim names with religious overtones. New legislation was also passed in March 2017 prohibiting “abnormal” beards and the wearing of veils in public places. Cash reward systems for information on illegal religious and separatist activities have been set up in the region to incentivize whistler blowers.

Reports of the Chinese government’s mass arbitrary detention and mistreatment of Muslims have provoked widespread international condemnation. Lawmakers in the United States have authored a bill that would, if passed, place sanctions on officials and companies linked to alleged human rights abuses taking place in the region. The U.N. Committee on the Elimination of Racial Discrimination has called on China to release all Uyghurs and other ethnic minorities held in the camps. The plight of China’s Turkic Muslims has further sparked outcry in the Islamic world as local citizens protest in solidarity. Despite growing criticism from all sides, China has rejected all accusations of misconduct, arguing that the camps function as job training and legal education centers. Last week, the Xinjiang regional legislature amended a law which attempts to justify the detention centers as “vocational training centers.”

Although the current crackdown in Xinjiang and the resulting police state is unprecedented in its scope and sophistication, China’s oppression in the region and its suspicion of its non-Han minorities has a long history. From CNN’s James Griffiths:

During the Sino-Soviet split, there was a deep fear in Beijing that Moscow would seek to annex Xinjiang, which bordered the then Soviet Union, or encourage ethnic minority groups to rebel.

This was a very real possibility: during the 1930s and 40s, as the short-lived Nationalist government fought a civil war with the Communists and faced a growing threat of Japanese invasion, two breakaway East Turkestan Republics were declared and swiftly put down in Xinjiang.

[…] Chinese officials argue that without a firm hand, the country’s far west risks turning into another Syria, where rebel groups and Islamist militants backed by foreign powers, including the US, have plunged the country into a years-long civil war.

This narrative has been used to justify not only restrictions on Islam, but the massive securitization of Xinjiang, with armed police manning checkpoints across cities, surveillance cameras everywhere, and citizens unable to leave the region. [Source]

At The New York Times, Chris Buckley uncovers documents that point to President Xi Jinping and other senior Communist Party leaders as the key orchestrators behind the rapid expansion of systemic detention and forced political indoctrination in Xinjiang.

Mr. Xi has not publicly endorsed or commented on the camps, but he ordered a major shift in policy soon after visiting Xinjiang in 2014 to weaken Uighurs’ separate identity and assimilate them into a society dominated by the Han majority, according to the documents.

[…] Mr. Xi made his first and only visit as national leader to Xinjiang in April 2014. Hours after his four-day visit ended, assailants used bombs and knives to kill three people and wound nearly 80 others near a train station in Urumqi, the regional capital. The attack was seen as a rebuff to Mr. Xi, who had just left the city and vowed to wield an “iron fist” against Uighurs who oppose Chinese rule.

[…] A month later, Mr. Xi called for a vigorous push to make Uighurs loyal members of the Chinese nation through Chinese-language instruction, economic incentives and state-organized ethnic intermingling. The leadership also approved a directive on establishing tighter control of Xinjiang that has not been made public.

[…] In the year after Mr. Xi’s visit to Xinjiang, the documents show, the party began building “transformation through education” camps to warn Muslim minorities of the evils of religious zealotry and ethnic separatism. [Source]

Xi’s shifting policy priorities aligns with the heavy-handed approach to ethnic issues advocated by a group of Chinese scholars and officials, whose academic writings have contributed to the party’s turn towards radical repression in Xinjiang. At China Brief, La Trobe University’s James Leibold profiles Hu Lianhe, a government researcher and “one of the leading figures of a new generation of PRC ethnic policymakers” whose academic publications have had a significant impact on China’s current Xinjiang policy.

Hu Lianhe’s academic research is preoccupied with the question of social stability. He helped pioneer the study of terrorism and counter-terrorism in China, publishing three influential books on the topic, where he analyzes much of the Western literature and discussion about terrorism following the 9/11 attacks. He then widened the scope of his research to explore other sources of instability, such as economic inequality, religious belief, criminality, corruption and mass incidents.

He claims to have developed a scientific and comprehensive “theory of stability.” For Hu, the maintenance of stability requires a broader focus than material and economic development, one that incorporates the ways political, cultural, spiritual, and ideological issues also affect stability. Ultimately, stability requires the “standardizing of human behaviour” (规范人的行为) in order to achieve the perfect state of harmony (Beijing Ribao, 13 July 2010). When viewed as a “comprehensive systems engineering project” (全面的系统工程), stability can be literally manufactured through the right blend of governance tools, with rule by law (法治) being the most important instrument.

[…] Through his study of instability, Hu developed an interest in the “ethnic question” (民族问题) and the challenge of maintaining stability in “terrorist-prone” regions like Xinjiang and Tibet, where “hostile foreign forces seek to split China.” With co-author Hu Angang, he wrote a number of controversial articles beginning in late 2011 calling for a major rethink of ethnic policy in China, what they labelled a “second generation of ethnic policies” (Aisixiang, 20 October 2011).

[…] Reflecting his security background, Hu Lianhe frequently warns against complacency, and calls on Party officials to “wake-up” (清醒), increase their “worrying mentality” (忧患意识), and blaze new policy trails. In his writing, sources of potential instability are everywhere. Yet, with their unique geographic, religious, and ethnic profiles, frontier regions like Tibet and Xinjiang are particularly vulnerable, and a “grave and present danger” to national security and the realization of the “China Dream.” [Source]

Elsewhere, Nataliya Vasilyeva at AP reports that Kazakhstan has, under Chinese pressure, denied asylum to a Chinese woman who spoke out about working in a Xinjiang detention camp:

[…] Sauytbay had been put on trial for illegally crossing into Kazakhstan and given a six-month suspended sentence, which was greeted by her supporters and rights activists as indicating that she would not be deported back to China.

The case highlights the delicate position that Kazakhstan finds itself in at a time of growing reliance on Chinese investment as well as mounting pressure from the public to protect fellow Kazakhs in China’s western regions.

[…] Sauytbay had told the Kazakh court in August that the indoctrination camp she had to work in was no different from a prison, according to Radio Free Europe. Chinese authorities made her train “political ideology” instructors who would work in the camps, she told the court. The revelation of such politically sensitive details would mean that if she was forced to return to China, she would likely be imprisoned. [Source]

In an interview with Azattyq, World Uyghur Congress advisor Kakharman Kozhamberdi detailed the mounting pressure and intimidation that Uyghurs in Kazakhstan have faced over the years as the Chinese government works to prevent them from helping their allies and relatives in neighboring Xinjiang. Translation by Gene Bunin from At the Art of Life in Chinese Central Asia

Azattyq: It’s been over a year now that both activists and Chinese Kazakhs have been talking of the “oppression of ethnic minorities” in Xinjiang. However, there does not appear to be any activity among the ethnic Uyghurs in Kazakhstan with regard to this issue. Why is that?

Kakharman Kozhamberdi: The reason is the pressure that comes from the law enforcement authorities. As an example, I was taken to administrative court three times [editor’s note: the first time for creating the People’s Party of Uyghurstan, and the second time for carrying out an unauthorized demonstration]. The officials told me to “shut my mouth and not raise the issue”. “We’re on friendly terms with China,” they told me. The Uyghurs of Kazakhstan have been pressured into inactivity. The central government does not take an open stance on the matter – instead, the pressure is mostly applied by different governmental bodies [editor’s note: Azattyq asked the National Security Committee and the Ministry of Internal Affairs for comment, but has not received a reply]. For example, it is forbidden to hold meetings regarding problems faced by ethnic Uyghurs. Over the past 10 years, our newspaper here hasn’t published a single one of my articles. I’ve been told that “there’s been an order from up top not to publish”.

[…] Azattyq: How many ethnic Uyghur families living in Kazakhstan have lost contact with their relatives in China?

Kakharman Kozhamberdi: There’s no data for that. They [relatives of the detained] are afraid to talk about that openly. I’ve invited them over on several occasions, saying that the information they can provide is needed abroad. Silence. In addition, the locals here have lost all contact with their relatives in China. They don’t call their phones, and even if they do, the other side is afraid to pick up. Because they can be jailed for conversing. They’re arresting everyone who’s studied or been abroad. The intellectuals are accused of being “two-faced”. “You praise China, but that’s not what you really think,” the government tells them. For example, all those who used to work in the Uyghur administration of Xinjiang University are in prison now. There’s a famous newspaper in the region, Xinjiang. The Kazakh and Uyghur editorial offices are both in the same building. Everyone there has been taken to “re-education camps”, starting with the chief editors and department heads. In reality, these are jails, or even worse. [Source]

In a defiant move that is expected to antagonize China, Malaysia released 11 Uyghur detainees who fled from Thailand last year and sent them to Turkey despite Chinese calls for them to be repatriated. A. Ananthalakshmi at Reuters reports:

“The charges were withdrawn because the attorney general’s chambers agreed to the (appeal) from our side,” [their lawyer, Fahmi Moin] told Reuters.

[…] The men were detained and charged with illegally entering Malaysia after last November’s daring prison break, by punching holes in a prison wall and using blankets as ladders.

[…] In February, Malaysia said it was considering China’s request to extradite the 11 men. In the past, it has sent some detained Uighurs to China.

Their detention came as Malaysia drew closer to China under former prime minister Najib Razak, but 93-year-old Mahathir, in his second stint as premier, has been vocal in backing Muslim communities against persecution. [Source]