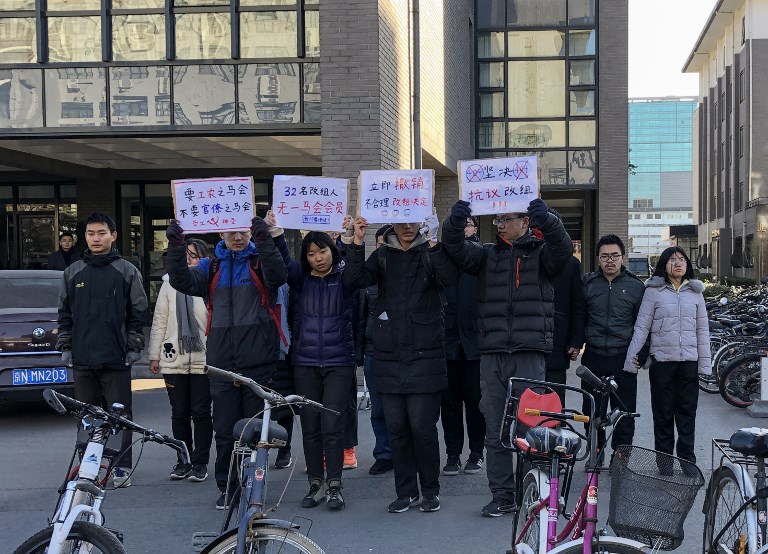 Following the detention of the president of a campus Marxist group at Peking University (PKU) and amid a state crackdown on student and labor activism, a group of PKU students gathered in short-lived protest on campus. The AFP’s Pak Yiu and Eva Xiao report:

The students gathered in an open area in front of an academic building where they held up signs and shouted slogans protesting the change in the society’s leadership.

[…] But security moved in almost immediately and started pulling students away, forcing some to the ground while others were pushed towards a waiting black car.

“Today, students of the Peking University Marxist Society who were holding signs and protesting were forcibly corrected,” the group said in a statement.

“Security personnel used violence to disperse students, who were pulled into the school building, many students were injured!” […] [Source]

Qiu Zhanxuan, the student detained earlier this week, was detained while en route to a celebration of the 125th anniversary of the birth of Mao Zedong. Qiu was released the next day with a warning, and was reported to be present at the protest. At the South China Morning Post, Mimi Lau reports further on campus security’s quashing of the students’ protest, noting that the day before the protest the university had announced a restructuring of the Marxist campus group:

[…A] notice also appeared on the university’s online bulletin board on Thursday announcing that a new 32-member committee had been put in place to run the student Marxist Society.

The notice was issued by the university’s extracurricular activities office on behalf of Sun Guoxi, the academic in charge of the society.

It said the reshuffle was needed because society members had “severely deviated” from promises made when they registered and had repeatedly organised activities that violated regulations. It added that Qiu was “not qualified to lead [the society]”.

[…] “We are deeply shocked and angered by such an absurd scene happening on the campus of Peking University,” read a petition letter posted online on Friday and signed by about 30 students.

“This is a clear move to place the Marxist Society under the control of campus bureaucrats.” [Source]

The PKU reshuffle comes amid an ongoing drive to limit student activism after many elite university students and graduates were actively supporting workers in Shenzhen in their quest to establish a trade union. Two earlier mass roundups in August and November targeted labor activists in southern China and supporters who were self-avowed Marxist activists–like Yue Xin and Sun Min, both PKU graduates. In addition to several pieces by or about Yue and Sun, CDT has previously translated PKU student Feng Junjie’s account of being beaten by thugs on campus during a November 9 episode, a classmate’s recounting of the earlier disappearance of PKU medical student Jia Shijie and the university’s efforts to deflect student inquiry into their classmate’s whereabouts, and an account of the monitoring and harassment of student activists at Renmin University.