‘Reeducating’ Muslims: How Did the PRC Come to This? 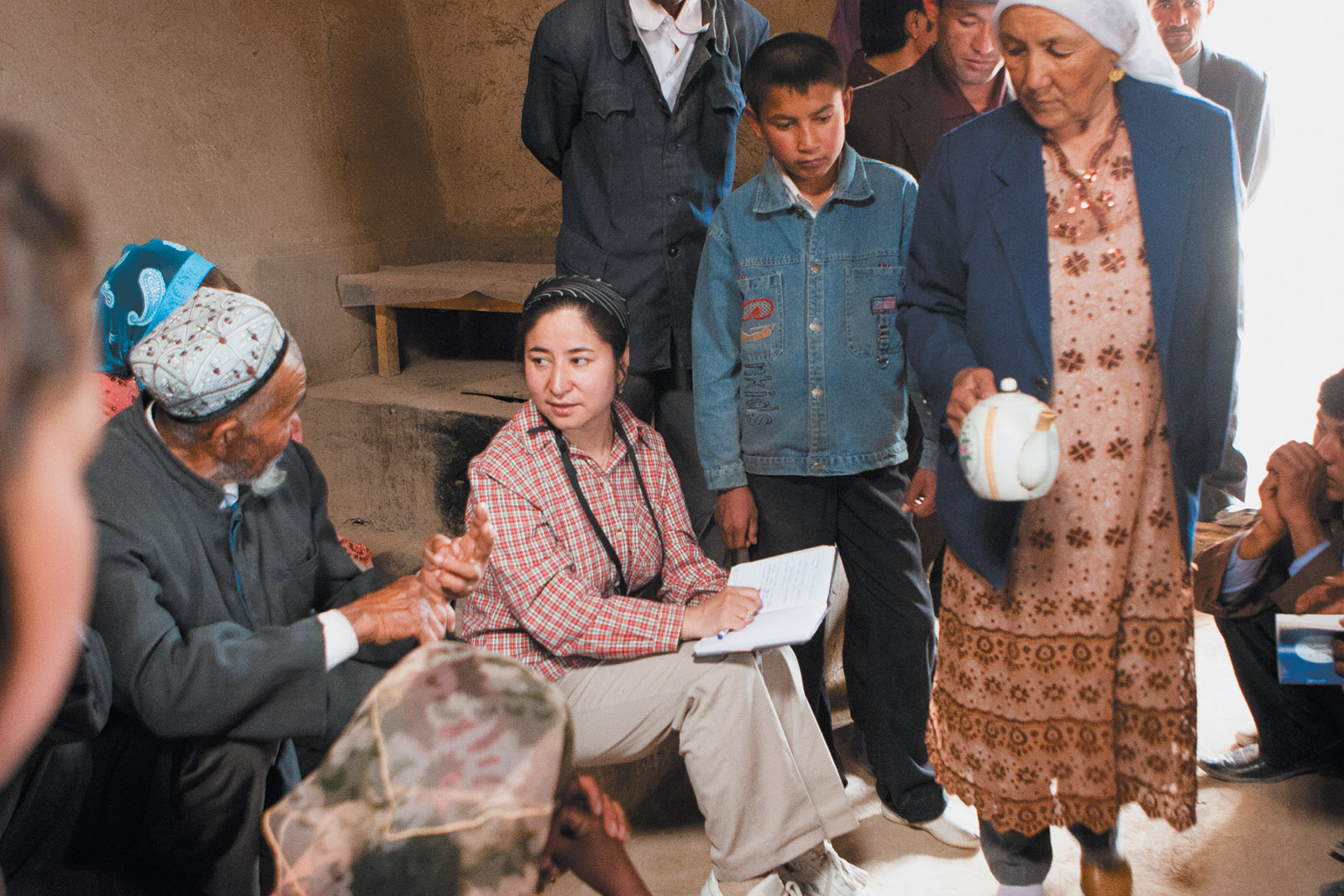 Although the Chinese government has long carried out repressive policies against Xinjiang’s Muslims, the systematic internment of an estimated one million Uyghurs in political “re-education” camps represent a level of oppression that is hitherto unprecedented. The accompanying campaign to eradicate Uyghur identity, primarily through harsh restrictions on Islamic religious traditions and practices, points to a coordinated attempt at forced ethnic assimilation. At The New York Review of Books, Georgetown University historian James Millward writes that this nationalistic Han “assimilationism” is a relatively recent development that stands at odds with the century-old tradition of ethno-pluralism, which has characterized the ruling class’ approach to managing diversity within China since the Qing empire.

Xinjiang is part of the PRC today only because the Manchu-ruled Qing empire (1636–1912) conquered it in the eighteenth century, in the course of a westward expansion that also included the annexation of Mongolia and Tibet. The Qing administered the Uighurs through local elites, under light-handed military supervision, while promoting trade and agricultural development. The Manchus prohibited Chinese settlement in densely Uighur areas for fear of destabilizing them, and did not interfere with Uighur religion, food, or dress. This culturally pluralist imperialism worked well, and despite a series of minor incursions from Central Asia into southwest Xinjiang, from the mid-eighteenth to the mid-nineteenth century the region was on the whole peaceful—enough so that the Uighur population increased fivefold and the economy expanded. […]

[…] When the CCP took over, it applied this ethno-pluralist approach, already entrenched in Xinjiang, nationwide. As an ethnically Han Communist Party reoccupying the former Qing empire in Central Asia, the CCP faced the same problem as the Russocentric Soviets with their tsarist legacy: how to run an empire without looking like colonialists. Loosely following the Soviet example, the PRC granted fifty-five non-Han peoples official status as minzu (nationality or ethnic group), with special rights enshrined in the Chinese constitution. Some nominally autonomous administrative territories were named after minzu: hence the province-sized territories of Xinjiang and Tibet became the Xinjiang Uighur Autonomous Region and the Tibetan Autonomous Region of the PRC.

[…] Following the collapse of the Soviet Union in 1991, however, which many Chinese political theorists blamed on Soviet nationality policies, a reassessment of the ethno-pluralist minzu system began. The former Qing imperial territories in Xinjiang and Tibet remained restive, despite rapid economic growth. After riots in Tibet in 2008 and Xinjiang in 2009, some scholars of ethnic studies in Beijing who were close to CCP leaders suggested that China’s minzu system was part of the problem and began discussing how to revise it.

[…] Terms such as “fusion,” “blending,” and “melting” entered the discussion, and in 2015 scholars and ideologues debated whether Sinicization (Hanhua), the notion that over the ages Chinese civilization spontaneously and peacefully assimilated neighboring peoples, had ever occurred. The myth of Sinicization has been long debunked by Western and many Chinese historians, who accept that acculturation between contiguous groups can happen, but is neither inevitable nor one-way. Yet the idea of Sinicization as a magical power of Chinese civilization is attractive to CCP nationalists, along with the concomitant fable that China only ever expanded peacefully. [Source]

A new MERICS podcast with researcher Adrian Zenz explores how the Chinese government is working to fundamentally reshape the cultural and religious identity of Uyghurs starting with their youth. As a part of this cultural genocide in Xinjiang, authorities have systematically targeted Uyghur cultural leaders including intellectuals and artists. In her piece at The Globe Post, University of London’s Rachel Harris, who conducts research on Uyghur culture, tells the story of prominent Uyghur singer Sanubar Tursun and how she became one of the million currently held in Xinjiang’s internment camps.

I first met Sanubar in the summer of 2000, just after the release of her first album, when she was at the height of her powers. As I traveled around the south of Xinjiang, Sanubar’s voice filled the town bazaars and rang out from local taxis and long-distance buses. She was an iconic singer, the finest of her generation, and she should have been treated as a national treasure, but the authorities were always suspicious of her influence and did their best to block her at every occasion.

[…] As news of the internment camps began to trickle out and we learned of the inclusion of leading artists and intellectuals among the million people detained, we could only hope that Sanubar’s celebrity might protect her. It now seems that hope was in vain. In December news began to circulate of her detention and a possible 5-year sentence. As usual, there has been no formal charge, not even an announcement of her detention.

[…] Sanubar’s rapid fall from celebrity to internment camp came alongside a wave of reports of well-known artists being arrested. Those we have firm news of include the much-loved comedian Adil Mijit, veteran pop star Rashida Dawut, the young singer Zahirshah who came to fame through the Voice of the Silk Road TV program, and the veteran folk singer Peride Mamut whose cassettes of charming Kashgar folk songs brightened the post-Cultural Revolution scene in the 1980s.

[…] We can draw two conclusions from this latest roster of detentions. Firstly, that no Uyghur is safe from the camps however great their celebrity or popularity. The levels of terror within the region are such that no protest and no opposing voices can possibly be raised there. Secondly, it is apparent that there is a deliberate policy of targeting cultural leaders: writers, academics, artists, adding weight to the charge of cultural genocide that is now being raised by Uyghurs in exile. [Source]

Uyghur language books have also been purged from bookstores. From Twitter:

THREAD: Source who recently visited Ürümchi says there are now ZERO Uyghur- and other minority-lang books on the shelves of Yan’an Lu Xinhua

Stark change even from my visit in June 2018, when there were some (very limited) works in Uyghur, Kazakh, and Mongolian for sale

The attack on artists and writers coincides with the revival of ideology in Xi Jinping’s China and his quest to make art and literature exist only for the purpose of politics. In a speech given at an internal Australian government seminar series in 2017, former China correspondent John Garnaut discussed Xi’s turn towards older Stalinist-Maoist models that sought to create a state capable of engineering the human soul through cultural controls. From Sinocism:

Xi was arguing for a return to the Stalinist-Maoist principle that art and literature should only exist to serve politics. Not politics as we know it – the straightforward exercise of organisational and decision-making power – but the totalitarian project of creating unity of language, knowledge, thought and behaviour in pursuit of a utopian destination.

[…] For Xi, as with Stalin and Mao, there is no endpoint in the perpetual quest for unity and regime preservation.

Xi uses the same ideological template to describe the role of “media workers”. And school teachers. And university scholars. They are all engineers of ideological conformity and cogs in the revolutionary machine.

Among the many things that China’s modern leaders did – including overseeing the greatest burst of market liberalisation and poverty alleviation the world has ever seen – those who won the internal political battles have retained the totalitarian aspiration of engineering the human soul in order to lead them towards the ever-receding and ever-changing utopian destination. [Source]