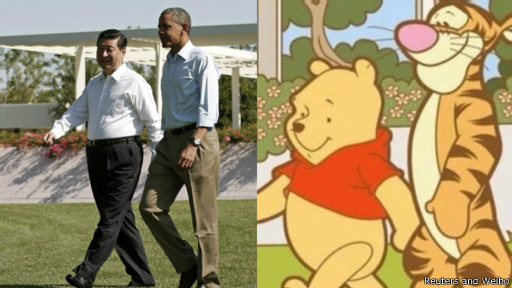 The inclusion of  “easter eggs” referencing pejorative nicknames of Chinese president Xi Jinping in an independent video game from Taiwan has resulted in several related terms becoming censored from Chinese search results or prohibited from being posted on Weibo, and has also led nationalistic Chinese gamers to review bomb the game. The sensitive references include one to  long-running comparisons of Xi to Winnie the Pooh, and another to a nickname poking fun at a staged presidential lunch event in 2013. The horror-themed game “Devotion,” created by Taiwanese company Red Candle Games, was released on the Steam platform on February 19. BBC News describes the game and the hidden content inside it that has apparently upset Beijing:

One of the easter eggs in Devotion is a poster containing the words “Xi Jinping” next to “Winnie the Pooh”, in an ancient style of writing. Winnie the Pooh has been censored on Chinese search engines and social media since 2017, after bloggers began comparing Mr Xi to the children’s story book and film character.

Gamers have also spotted an old newspaper in Devotion that refers to an individual who has received a prison sentence, nicknamed “baozi” or “steamed bun”.

[…] Taiwanese Vice Premier Chen Chi-mai has praised the game, saying: “Only in countries with democracy and freedom can creation be free from restrictions.” [Source]

At Polygon, Owen S. Good reports that the Xi mockery in the game prompted some Chinese gamers to review bomb the Steam site, eliciting an official apology from Red Candle:

Count some Chinese players as not big fans, though. Germany’s Spiel Times noted that the interior decorating of Devotion’s apartment includes a poster that says “Xi Jinping Winnie-the-Pooh moron.” This is a big no-no. Xi is notoriously self-conscious about comparisons to Pooh Bear, to the point that China’s super-chill censors sometimes crack down on just the image of Pooh, whether or not it accompanies POTPROC. It was enough to worry folks about the Chinese launch of Kingdom Hearts 3, which features the character.

Devotion’s jab is a lot more overt. It probably does not help that the game is set in Taiwan, either. In 570 reviews in English, the game has a mostly positive reception. There are 18,380 reviews overall, however, a majority of them bad (9,015 thumbs down, versus 5,841 up). That gives it a super-accurate mixed reputation on the Steam storefront page.

Red Candle Games posted an apology which said the inclusion of the poster was a “purely an accident.” Apparently it had been some kind of a placeholder asset and a “version synchronizing problem” left it in by mistake. “As a game company, Red Candle Games has immense room for improvement,” the studio said. “We are deeply sorry for the trouble it caused to everyone, and that we sincerely ask for the forgiveness of our players. [Source]

“习包子” (Steamed Bun Xi) and “小熊维尼” (Winnie the Pooh) remain blocked from search results on Weibo. An attempt to post the former term on the social media platform on February 27 yielded a disclaimer indicating its current prohibition; the latter term was post-able. CDT Chinese editors found several new relevant search terms that appear to be censored on various platforms in China this week.  “还愿” (Devotion) and “赤烛” (Red Candle) were absent from Weibo search results, and blocked from searches on games and animation video-sharing site Bilibili this week. Attempts to post “Steam游戏” (Steam game) yielded a disclaimer that the term was in violation of relevant laws and regulations. The Steam video game platform is not officially approved in China, but, according to tests by GreatFire.org, is sometimes accessible from China. The above quoted BBC article notes that this recent episode “has raised questions as to whether Steam will be the latest overseas online platform to be blocked in mainland China.”

The game’s release comes as cross-strait tensions are at a relative high. Following Beijing’s sustained exertion of economic, diplomatic, and military pressure on the island, last week Taiwanese President Tsai Ing-wen warned the entire Asia Pacific to be wary of Chinese aggression: “If it’s Taiwan today, people should ask who’s next? Any country in the region — if it no longer wants to submit to the will of China, they would face similar military threats.” Ahead of elections in Taiwan late this year, the chairman of the Beijing-friendly opposition Kuomintang party mentioned the possibility of a peace deal with China if his party wins. Beijing quickly clarified that any talks leading to that deal would have to promote “reunification.”