The following term comes from the Grass-Mud Horse Lexicon, a glossary of terms created by Chinese netizens and encountered in online political discussions. These are the words of China’s online “resistance discourse,” used to mock and subvert the official language around censorship and political correctness. CDT is expanding its China Digital Space (CDS) wiki beyond the Grass-Mud Horse Lexicon to include short biographies of public intellectuals, cartoonists, human rights activists, and other people pushing for change in China. CDS is a work in progress. 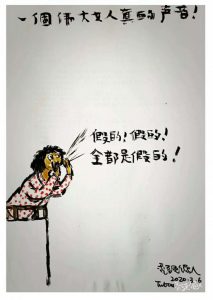 Criticism of the government’s mismanagement of initial response efforts during the COVID-19 outbreak, when censorship and propaganda seemed to many to have been given a higher priority than public health.

In March 2020, Vice-Premier Sun Chunlan visited a residential development in Wuhan, the epicenter of the outbreak. In multiple videos captured by quarantined residents, several women can be heard shouting at Sun and her entourage below, “Fake! Fake! Everything is fake!” The indictment reverberated with netizens who felt that the “people’s war” on coronavirus has been a sham from the beginning, when the authorities punished whistleblowers and insisted that the virus was under control. In a QQ Qzone blogpost, user Hao Lifeng described the scene and explained what it shows about the efficacy of state propaganda:

[…] That shouting woman thought that the higher-up didn’t know that the lower-downs were faking it. This shows her naiveté. The higher-ups aren’t faking it? Think back to the hundred thousand jin yield per mu reported by the People’s Daily [during the Great Leap Forward], and to the ongoing cover-up of this epidemic. How could they not know! But objectively speaking, she has revealed the coordinated pretense being put on by the highest and lowest levels of government. She’s put them all on alert that we, the people of this country, know what they’re up to, that it’s a sham, that you’re ridiculous. Now that is something to think about. [Chinese]

High-level officials in Beijing and local Wuhan authorities have garnered considerable criticism from netizens at home and commentators abroad for the slow response to the outbreak, and the heavy censorship of relevant information as it worsened. (The severity of the disease led angry netizens to rare brazenness in their online protest against censorship, and inspired new means of circumvention.) As official numbers swelled to over 80,000 infected and 3,000 dead, state media ran positive stories focused on the hard work of heroic leaders and health workers in a “people’s war” against the coronavirus; some of this propaganda backfired, further enraging the public.

In recent days, as Beijing has been claiming a domestic victory over the pandemic disease with a reported multi-day zero transmission rate, residents in Wuhan have reported skepticism. Meanwhile, Beijing has widened the scope of its COVID-19 propaganda, attempting to promote China as a humanitarian aid provider and qualified leader of the global fight against the disease, and to counter claims that earlier action in Wuhan could have prevented the pandemic.