As protests against police violence and inequality sweep an increasingly divided U.S. following the police killing of yet another unarmed black American on May 25, Chinese authorities and state media are taking full advantage of the situation to make propaganda hay. Coming as diplomatic relations between Washington and Beijing are highly strained on many issues, Beijing is seizing the American unrest as another opportunity to present its system as superior to Western liberal democracy.

“Why did the U.S. have so many problems with the restrained and civilized way of law enforcement by the Hong Kong police but have no problem at all with threatening to shoot at and mobilizing the National Guard against its domestic protesters?” Foreign Ministry spokesman Zhao Lijian said Monday.

[…] Beijing has blanketed its domestic media with images of Minneapolis, Washington and other U.S. cities aflame in recent days.

State media have also given prominence to Mr. Trump’s threat of a crackdown, with his tweeted warning that “when the looting starts, the shooting starts.” The phrase faced bipartisan criticism because of its association with police violence against Miami’s black community in the 1960s.

Some of the messages from China’s diplomats have been far from subtle. […] [Source]

For example, foreign ministry spokesperson Hua Chunying quoted a U.S. protest slogan in reply to a recent tweet from her American counterpart on Beijing’s abandonment of Hong Kong:

CDT Chinese editors report that many Chinese web users took to Weibo to express their frustration with Hua’s official use of a platform banned in China, reminding her that they can’t even tweet in comments on state media’s coverage of her burn against the U.S.: 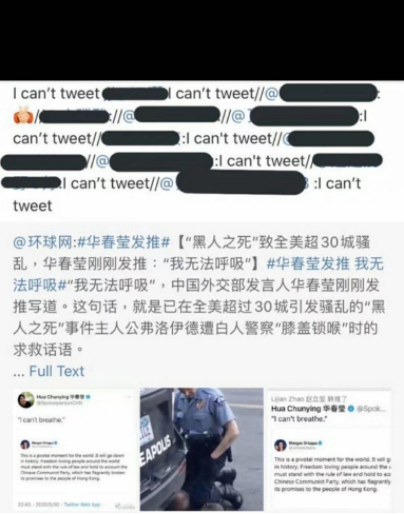 A later follow-up tweet from Hua appeared to demonstrate her misunderstanding of the reactionary nature of the slogan “all lives matter”:

All lives matter. We stand firmly with our African friends. We strongly oppose all forms of racial discrimination and inflammatory expressions of racism and hatred. https://t.co/bRXvafrKZH

Human Rights Watch last month reported on a surge of anti-African discrimination in China, where long-documented anti-black racism spiked during the COVID-19 pandemic. The New York Times this week covered experiences of discrimination by black Americans in China, and compared protest against Chinese discrimination from African leaders to the Trump administration’s muted response.

State broadcaster CCTV on Saturday referred to the protest cities as “warzones” and produced round-the-clock updates and analyses highlighting the racial divide in the US.

[…] On Saturday night, a prime time commentary on CCTV said US-style human rights were hypocritical and disgusting and also used the phrase “beautiful sight” to describe the spectacle.

It said American politicians should apologise to their people and described the chaos as a “self-inflicted wound”.

Meanwhile, party mouthpiece People’s Daily published a short video of the arrest of CNN journalist Omar Jimenez during a live broadcast in Minneapolis, and drew a contrast with a clip showing Hong Kong police retreating from a protest site last October. [Source]

The U.S. and China have also recently been engaged in a tit-for-tat battle, wherein the U.S. limited access for Chinese state media workers in retaliation for the Chinese government expelling several American reporters. for the other’s overseas reporters, which comes after years of increasing pressure on foreign journalists in China. In Hong Kong, where concerns have been mounting for years over the erosions of press freedoms and increasing physical risks for reporters, journalists covering protests last month were attacked by police, a practice that was common in the city during last year’s demonstrations. Meanwhile, reports of the use of violence against reporters covering U.S. protests over the last week have been widespread, and Australia has opened an investigation into U.S. police violence after a crew of foreign correspondents were struck with rubber bullets.

The recollection of Pelosi’s “beautiful sight” comment on the Hong Kong anti-extradition protests last June was made widely by Chinese state media, officials, and nationalists. CDT Chinese notes a Weibo comment from the official Communist Youth League Central Committee account asking if photos from weekend violence in Minnesota were “a beautiful sight?”, and also rounds up earlier state media disinformation on the nature of Pelosi’s comment. NBC News notes that a Global Times editorial also used the term, and relays comments from the nationalist state-affiliated tabloid’s vocal chief editor:

China’s Global Times newspaper, seen as a mouthpiece for the Communist Party, ran an editorial on Saturday entitled: “Watch out! ‘Beautiful sight’ in HK is spreading across the U.S.”

Editor Hu Xijin compared the two situations in the column, writing that it was “as if the radical rioters in Hong Kong somehow snuck into the U.S.”

“Let’s wait and see which country will encounter more chaos,” he wrote.

In a tweet on Saturday, Hu also urged President Donald Trump not to “hide” behind Secret Service officers after the president thanked them for maintaining their cool as protesters converged near the White House.

“Go to talk to demonstrators seriously,” Hu said. “Negotiate with them, just like you urged Beijing to talk to Hong Kong rioters.” [Source]

Reuters’ Huizhong Wu reports on the prominence of news on the topic on the highly-controlled Weibo social media platform, and compares the aims of state media focus on the U.S. protests to its coverage of the U.S. coronavirus epidemic:

On China’s social media platform Weibo, at least five news items on the protests were among the top 20 trending topics by midday, led by reports Trump had been temporarily taken to a bunker as protesters surrounded the White House.

[…] For some analysts, the Chinese media coverage of the protests echoed their reporting on the coronavirus situation in the United States.

“The number one thing they want to show is that the Communist Party is doing a better job in terms of fighting the coronavirus and managing society,” said Alfred Wu, associate professor at the Lee Kuan Yew School of Public Policy at the National University of Singapore.

The coronavirus pandemic is the source of perhaps the most heated and globally consequential ongoing diplomatic fight between Beijing and Washington. The Trump administration has criticized Beijing for covering up the initial outbreak and attempting to profit off of it. Trump has castigated China for lying to the World Health Organization—and the WHO for publicly believing China’s word—and for causing early Taiwanese warnings of potential human-to-human transmission to be ignored. He has also threatened to pull all funding for the WHO as a result (though, after a raft of criticism, has appeared to backtrack on that threat). Trump, who is the target of domestic censure for early inaction and misinformation about the coronavirus, has also led efforts to blame Beijing for the origins and spread of COVID-19, and hold them responsible for the damage of the pandemic.

While Chinese authorities are similarly the target of much domestic anger for early pandemic inaction and opacity, their public opinion work has drowned out criticism while amplifying nationalism online and in the real world. At The New York Times, Javier C. Hernández reports on how state media and goading from government officials contribute to a declining public opinion of the U.S., and further fuels nationalism and anti-Americanism:

“This situation in the U.S. will make more Chinese people support the Chinese government in its efforts to denounce and counter America,” Song Guoyou, a scholar at Fudan University in Shanghai, said in an interview. “The moral ground of the United States is indeed greatly weakened.”

[…] “The violent protests in the streets of urban America are further discrediting the U.S. in the eyes of ordinary Chinese,” said Susan Shirk, chair of the U.C. San Diego 21st Century China Center. “The propaganda depicts American politicians as hypocrites living in glass houses while throwing stones at China.”

[…] “Even without the propaganda, Chinese people nowadays find little to admire in the U.S.,” she said. “As the U.S. model is tarnished, the voice of Chinese liberals is silenced.”

[…] Some worry that the propaganda campaign may further inflame tensions between the two countries. He Weifang, an outspoken law professor in Beijing, said that even some critics of the government are becoming more sympathetic to the official line. [Source]

China’s criticism of the U.S. and highlighting of its violent crackdown on demonstrators comes on the eve of the 31st anniversary of the violent June 4, 1989 crackdown on pro-democracy protesters, an incident that U.S. officials have steadily condemned since the day it occurred while Beijing has taken all means possible to erase it from memory. As the Hong Kong government blocked the city’s annual June 4 vigil this year, The Nation’s Wilfred Chan reminded his Twitter followers of Donald Trump’s post-June 4, 1989 comments, and urged caution:

Trump’s comments on Tiananmen Square, just 9 months after the killings:

“When the students poured into Tiananmen Square, the Chinese government almost blew it. Then they were vicious, they were horrible, but they put it down with strength. That shows you the power of strength.”

The Tiananmen Square Massacre extinguished China’s democracy movement. It opened the gates to a wave of state repression against workers. It led to a brutal purge of the CCP’s pro-democracy progressives. It is a key reason why Hong Kong has no democracy today. Trump praised it.

A similar state-led crackdown is absolutely possible in the United States. It would change everything forever.