Viral Content is a new CDT series introducing terms coined and used by Chinese netizens during the 2019-2020 COVID-19 outbreak. These terms include both subversive critiques of government policies and nationalistic support of them. Similar terms are being compiled and translated at China Digital Space, CDT’s bilingual wiki, as we expand it beyond the Grass-Mud Horse Lexicon to include short biographies of people pushing for change in China, topical resource pages, and special projects.

There Should Be More Than One Voice in a Healthy Society 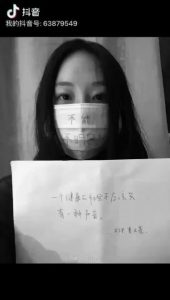 Wuhan Central Hospital ophthalmologist Dr. Li Wenliang was officially reprimanded in early January 2020 for spreading “fictitious discourse” about the outbreak of a “SARS-like virus” that would lead to the COVID-19 pandemic. While working on the frontlines in Wuhan, Li later contracted the virus. On February 7 it took his life. Prior to his death, Li made a statement about the relation between transparency and societal health in an interview with Qin Jianhang and Timmy Shen at Caixin on January 30, 2020, which he gave from an isolation ward in Wuhan:

Dr. Li’s death from the virus on February 7, 2020 was initially covered up, but he was quickly vindicated as the authorities finally acknowledged the severity of the pandemic. As lockdowns radiated out from Wuhan across the country, Dr. Li’s words became a rallying cry for netizens, many of whom celebrated the doctor as a martyr:

@八管传说: Dr. Li, China is finally coming around the bend of the pandemic. You said that there should be more than one voice in a healthy society. Now they won’t even let an interview in Renwu get published. I hoped the epidemic would change some things in China, but in the end nothing has changed at all. [Chinese]

@阿专的围脖: I just thought of something: What do people think should be written on Dr. Li’s gravestone? Hero? Martyr? Those words don’t mean a lot. The most meaningful thing to write is “There should be more than one voice in a healthy society.” [Chinese]