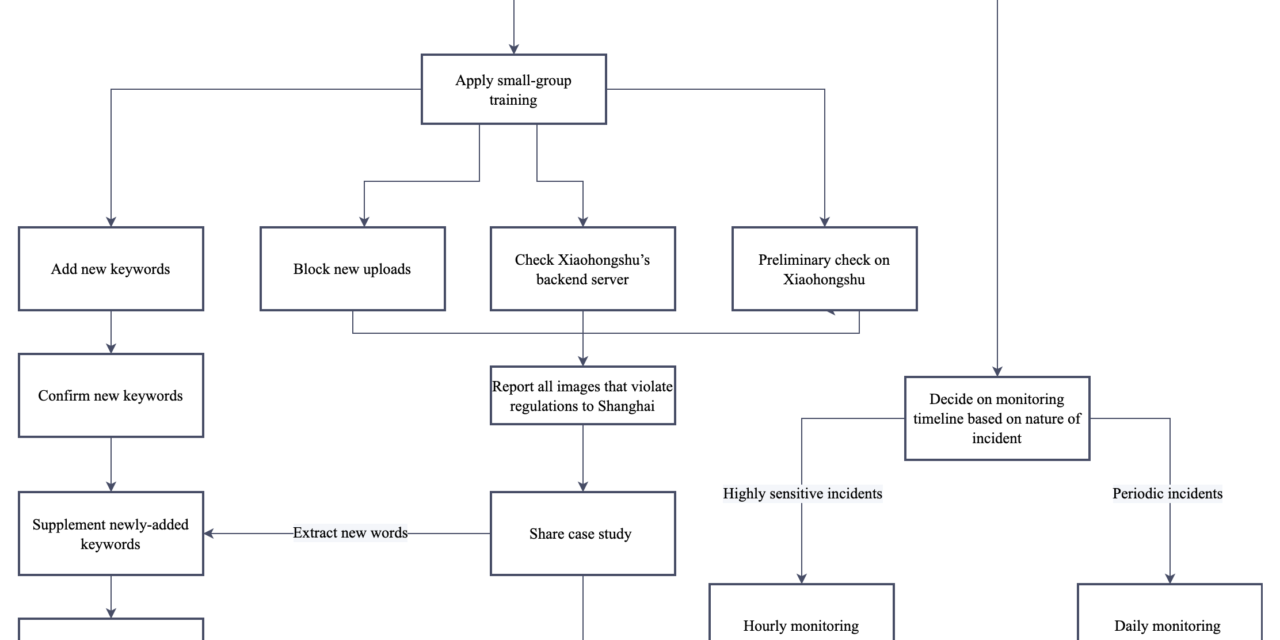 A leaked internal document from Xiaohongshu reveals how the Instagram-like social media and e-commerce company deals with censoring discourse about  “sudden incidents” on its platform. The document is part of a hundred-plus-page trove that details how the company censors its users in compliance with Beijing’s commands. Last week, we published a partial translation of 546 derogatory nicknames for Xi Jinping, compiled over the course of two months, that was included in the leak.

The document on “sudden incidents”—an official designation for accidents, natural disasters, and political disturbances—is titled “Public Opinion Monitoring System & Management Procedures,” and reveals both what Xiaohongshu considers sensitive and the process by which it censors it with “no omissions.” It begins with a detailed and expansive list of incident types likely to require special treatment. The list include carjackings, landslides, the “Two Sessions,” illegal cult activity, outbreaks of disease among livestock, labor strikes, geographic discrimination, public criticism of the Chinese Communist Party, student suicides, and even the introduction of products that might compete with Xiaohongshu for its user base’s eyes—seemingly blurring the line between censorship and anti-competitive practices. Sudden incidents that occur in Shanghai and Beijing are treated with extra scrutiny. A note underneath the list reads: “If a sudden incident is confirmed to have occurred in Beijing or Shanghai, report it to the Government Relations Team [1] immediately.”

The document goes on to detail the precise mechanisms by which Xiaohongshu quashes discussion of the potential incidents listed above, a process that differs depending on where the censorship order comes from. Censorship directives issued by the Cyberspace Administration of China are to be implemented in “real-time,” whereas internal censorship directives require a response within a comparatively lax five-minutes. In both cases, Xiaohongshu builds new lexicons of “sensitive” words that it keeps on an internal server and “banned” words that it reports to a higher authority, either its Shanghai Operation Security Group or a separate Shanghai-based organization. The lexicon includes derivative variants of both “sensitive” and “banned” words.

CDT has translated the document in full:

Note: If a sudden incident is confirmed to have occurred in Beijing or Shanghai, report it to the Government Relations Team immediately.