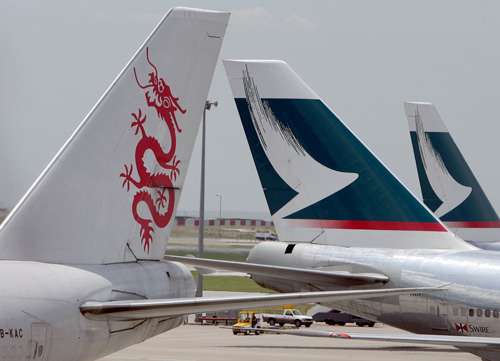 Jams and congestions, that is China! No exception for flying, as many of us have experienced with delays catching planes. With Olympics coming, China will take actions. Via the Wall Street Journal (photo: Cathay and Dragonair adding flights to China, via takungpao):

Shanghai’s Pudong International Airport shut down for four hours one afternoon in December when China’s air force ran a drill. Airports in at least three other big coastal cities that fall under the Nanjing Military Area Command also had to close, forcing the diversion or delay of hundreds of flights, both foreign and domestic.

Planes flying from New York to Chicago can travel at any of about 13 altitudes. China limits civilian aircraft to flying at seven altitudes, which means fewer jets can enter the sky. Cathay Pacific Airways, for example, has just four altitudes to choose from — roughly 29,500, 33,500, 37,400, and 41,300 feet — for its planes traveling from Hong Kong to Shanghai.

“The situation has definitely gotten worse in the past two years — progressively worse,” says a foreign pilot who has flown to China for 14 years. Hong Kong’s government reports a tripling in departure delays from its airport over the past three years, to 2,996 last year from 973 in 2004. [Full Text, subscribers only]

Air Rage on the Rise in China