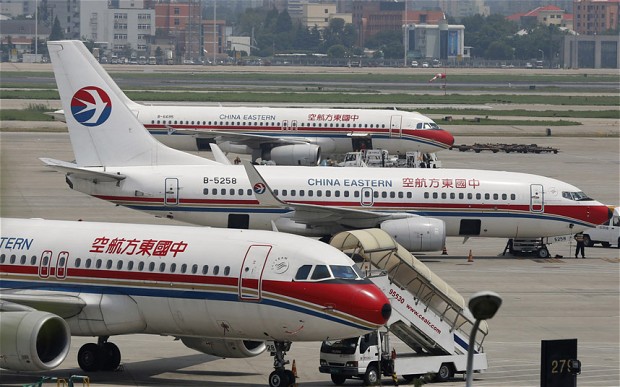 News websites pay strict attention to commentary on flight delays and cancellations at all locations. Do not call military exercises into question. (July 30, 2014)

Chinese aviation authorities asked airlines to reduce flight traffic by as much as 75% at two of the country’s busiest airports Tuesday, the latest air-travel disruption because of military exercises along China’s southeastern coast.

China’s Ministry of National Defense coordinated the exercises, which it said were routine and designed to test the military’s combat capability, according to a statement on the ministry’s website. The ministry gave no details about the precise location or schedule of the drills.

The reduction is part of a three-week curb on flights through mid-August because of the drills. So far the restrictions have resulted in capacity reduction of as much as 25% at a dozen Chinese airports, including the two in Shanghai, airline officials said. […] [Source]

The Telegraph’s Malcolm Moore notes that last weekend over 800 flights saw delays or cancellations in Beijing and Shanghai alone, and has more details on the military drills that are slowing down air traffic in China:

Military insiders said this year’s exercises are the largest ever and are intended to simulate how the PLA would respond to an attack on China by a foreign enemy.

[…] Part of the drills involved a simulated electromagnetic attack designed to knock out communications and radar systems. The PLA Daily, the official army newspaper, noted there had been “heavy airstrikes”, as well as “electronic disturbance teams” and even “chemical weapons drills”.

[…] “The naval drill beginning this week involves the East fleet, the North fleet and the South fleet, which is unprecedented for the navy,” said Colonel Chen Hong, a former professor at the PLA Air Force College.

“Every airborne unit and ground missile unit has been deployed in the PLA Air Force, which is also a first,” he added.

[…] In addition, all seven of China’s military regions have sent soldiers to Beijing to take part for the first time in a set of drills designed to test soldiers against an elite force modelled on the US army. [Source]

Military drills began in May, and are expected to last until mid-August. Prior to Tuesday’s live-fire drill, state media quoted the Ministry of National Defense saying that the exercises would have “limited impact” on civil aviation.