Below is an editorial from Southern Metropolitan Daily published on May 31, after the Xiamen Government decided to freeze the construction of the PX chemical project. Partially translated by CDT:

On May 30, the Xiamen municipal government froze the Haicang PX chemical project, and said it would submit the project to an authoritative organization for an impartial review.
Dispute over the project has been lingering for some time. The Xiamen government refused to make concessions, even after 105 CPPCC and six China Science Academy members objected to the project during this year’s two conferences. The government stressed that the project’s procedure is unmistakable and legitimate. It also reinforced the propaganda proclaiming the positive side of the project. Besides, it decided to “consolidate the judgment and understanding and start the construction without delay”.

At such a downhearted moment, Xiamen residents unfurled a moving self-defense campaign. Online news said that millions of Xiamen residents sent text messages to each other’s cell phone to boycott the PX project. The messages asked people to take actions as a group, wear a yellow arm ribbon and express their opinion openly.

As public opinion seethed, the Xiamen government suddenly announced a slowdown of the PX project. The pause is certainly a result of boiling public opinion. The decision brings both encouragement and worry to the anti-PX people. It’s an encouragement because it turns out that the public opinion is working; at the same time, people are also worried that when public opinion ebbs, the project will be restarted.

If the local government is sincerely concerned with public opinion, it should sit down with the CPPCC members, scholars and other citizens and have an open and straightforward conversation. It should not simply release a platitudinous statement or a unilateral notice to announce the halt of the project, which has raised environmental concerns among city residents. It should also not maintain a defensive position towards public opinion. [Full Text]

-Also a protest has been kicked off in Xiamen, according to Reuters. Below is a spot photo taken by Boxun. 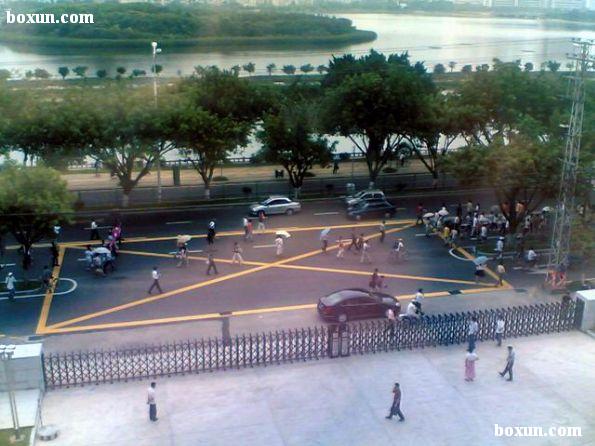 -See this post for a short video about the demonstration

However, much like other local governments, the Xiamen government held a stereotyped prejudice against the civil movement. It assumed that group actions would result in social unrest, that behind the millions of text messages there must be an organized conspiracy, and that there were ill-natured anti-government citizens fanning the flames. Following this reasoning, the government will punish those activists when public opinion wanes, in order to warn others and prevent new public group actions.

But the fact can’t be simpler: The millions of Xiamen residents, who wore yellow ribbons on their arms, were objecting the PX project because it would damage their health. They were not acting against the government. What Xiamen residents want is a green, clean and beautiful home, not social unrest. In fact, during the anti-PX movement, all signs proved that people did not want to create trouble. From what we have learned, whether in comments painted on walls or posted on online forums, whether in QQ talk or cell phone text messages, there was no sign of violence, and no call to escalate the event. What we have seen were peaceful appeals and rational voices.