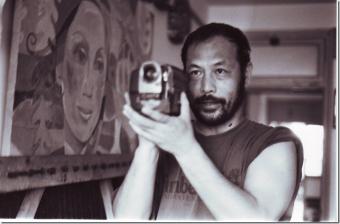 Hu Jie calls himself a film laborer. He has shot a number of documentaries about China’s laborers in the past ten years. His documentary In Search of the Soul of Lin Zhao has been watched by many people, but the film’s director, the bearded man with a sympathetic camera, has been mysteriously silent. Hu accepted an exclusive interview with The Minjian Magazine recently, talking about how he made the Remote Mountain, a documentary about the harsh life of coal mine workers in China’s northwest.

In a 12,000-feet-deep coal pit, workers said to Hu Jie, “Remember, if you hear a strange noise, that’s a signal for collapse. You still have some time to escape. If you are trapped in the coal pit, eat coal. You can survive by eating coal. ”

Hu Jie could only hear his own breathing in the suffocating pit. It was so dark there that he could see nothing.

The miners had to scoop out from the pit several thousand pounds of coal each day. They sometimes had to kneel down in water to dig the coal. They had no modern tools for the work. Besides a spade and a basket, they were given an oil lamp. Most of them didn’t have a safety helmet.

They had no labor contract with the mine. There was an unwritten rule for compensation, though. A worker’s family would get 5,000 yuan ($700) if he died in the coal pit.

The workers didn’t wash themselves for months, because it cost two yuan for them to take a shower. They were covered with coal from head to toe. They were in rags, like cavemen. They were called “pit cats” by locals. They were laborers living under the most primitive conditions.

Hu Jie went to the mine in June 1995. He lived there with the workers for two months, going up and down the coal pit everyday. The workers, who were silent most of the time, told him how harsh their lives were.

They had to pay various taxes and tuition for their kids. They were not paid after working in coastal cities. They would get black lung disease after five years laboring in the coal pits. But they were willing to make the sacrifice for their kids.

“We are told by the Party to ‘serve the people’. Who are the people? The workers here are the people. But who is serving them, those struggling on the edge of life?” Hu Jie said. “I am just keeping a record of their labor.”

Most of the tools used at the coal pit were as primitive as 100 years ago, except for one modern weapon owned by the manager — a rifle, which was used against rebelling workers and suspicious outsiders.

“Why are you here? ” an official of the coal mine asked when he saw Hu shooting film of the workers.

“The workers amazed me, ” Hu answered.

“We think so too. But that’s just the way they are.”

The officials pretended to be calm. When they talked about the life of the “pit cats”, their faces would twitch.

“Will your film about us damage the image of socialism?” Some workers asked Hu Jie.

“It’s socialism that damages your image. You shouldn’t have lived this way, ” answered Hu Jie, who was almost in tears.

He felt a deep sense of humiliation for the workers. How dutiful they are! Their first thought is about the state!

The administrators of the coal mine treated Hu as a guest at first. Its manager told Hu some truths when he got drunk.

“We are committing crimes. It’s illegal for the workers to labor this way. It’s illegal to ruin the trees on the mountains. I will come here to plant some trees after I resign from my job, ” he said.

But they changed their attitude towards Hu a month later, this bearded man had been filming all along!

“They are going to kill you, ” the workers said to Hu. “You should leave now!”

A bullet flew over Hu’s shoulder one evening. Hu left.

That’s how he made the documentary The Remote Mountains (远山).

Person of the Week: Ai Xiaoming

Chai Jing: “Under the Dome”