Anti-PX marches on Dongshan Island two weeks ago were a country cousin to the urbane “strolls” last year in downtown Xiamen. The protest burst into a rumble, as often occurs down in the sticks, only to be smothered just as fast by riot police and a media blackout. Still the resemblance to Xiamen was strong.

The demonstrations in Dongshan sprouted from national press reports – of a shadowy Fujian government proposal to relocate the forsaken Xiamen petrochemical project nearby – and grew from the volley of spitballs in local neighborhoods and chatrooms. Opposition took about as long to gestate into action (two-and-a-half months), drew a comparable number of citizens (as many as ten thousand, as few as two), and relied on ample logistical support from the local business community. And as in Xiamen, where one young protester was bagged for taking it to the streets before everyone else did, there were false starts as well.

Weeks ago in February, a far more modest protest unfolded in Zhangpu county, home to the proposed site on Gulei peninsula. Alarmed fishermen and other residents joined in, converging on local government offices. But details remain sketchy, state media journalists covering the region said in recent conversation. The town of Gulei has only 20,000-odd inhabitants. “Because the scale was not as big, so nobody paid close attention,” one correspondent said.

The incident did however help get the bile flowing across the bay in Dongshan, she noted (see map). More than 200,000 people are concentrated on the island, home to PLA drills, tourist beaches and large fisheries. Big breeders and other entrepreneurs are said to have furnished meals and strategic assistance to the demonstrations, according to another journalist. The periodic military exercises on the island may have rubbed off on them. Photos suggested that women and the elderly were purposely maneuvered to the front lines.

In the face of persistent rumor over the unconfirmed reports, the official code of silence pressurized the climate for discord. Only last week in Beijing, pressed for comment at an open session of the legislature, did Fujian officials own up to their designs on Gulei. But they maintained their proposal has yet to be finalized.

Company officials have acknowledged privately that their plant may never get built. Given the outlook is still uncertain, they were surprised by the protests. “We’re very puzzled as to why Dongshan became such a big event,” said a contact at Taiwanese-owned petrochemicals conglomerate Xianglu, the parent company to the PX project. He laughed off the suggestion that any decision had been made. “Right now we still have to wait and see, because the government has not made its decision very fast,” he said. “We reckon they have to wait at least until after the ‘Two Congresses’.”

The proposed foster home lies on a wisp of land surrounded by water on three sides and sparsely inhabited, and is considered a better place for petrochemical base than the Haicang development zone in Xiamen. “In fact, the position is relatively good,” contended one of the journalists.

But again as in Xiamen, the political and economic arguments against the project have overshadowed the realities of its environmental impact, which even in Xiamen were far more defensible than opponents were willing to acknowledge. Dongshan islanders worried that the plant could pollute the bay and affect their fishing and resort business. “According to my understanding, the sea separating them would not be polluted by it. But because it’s been so demonized…”

Dongshan residents might have thought the time to rise up was now or never. “Because the project would be under the authority of Zhangpu, not Dongshan,” explained the other journalist. “So if the waters in the area of Dongshan were polluted, Dongshan would not have the power to propose the company make changes.”

She said the dust-up lasted late into night on Sunday, March 2, and involved a few thousand people at most, not 10,000 as reported in some outlets. Protesters trashed the local government’s offices and hotel and flipped several police cars. She confirmed that twenty-odd people were injured in the dust-up and that rumors that one woman fainted and died, which served to ratchet up tensions, proved incorrect.

In the aftermath of the Dongshan protests, a top Zhangpu official informed her news organization last week that his government no longer intended to accept the PX project. But his statement was unclear. “He said that it wasn’t that they did not want it but that Xiamen did not want to give it to them,” she explained. “So we doubt whether what he said is true.”

====
Also related, see the following open letter from the local government to residents if Dongshan, written on March 2, translated and summarized for CDT by Linjun Fan:

Open letter the the people of Dongshan County

After several violent protests against the building of a chemical factory erupted in Dongshan County, Fujian province, local government handed out an open letter to the public on March 2.

More than 2,000 protesters gathered at a highway entrance and engaged in “intensive confrontation with police” on Feb.29 and March 1, according to the letter. It added that a number of government officials and police officers were injured and a dozen cars were damaged.

Protesters also gathered at various places in the city, smashing the windows of various buildings, including the headquarters of the County Government and overturning more cars, the letter said.

“The protests have caused severe damage and had a grave social impact. We notice that most of the protesters were misinformed students and citizens, but there were also some drug users, bullies and hooligans,” the letter said.

“Judging from the situation over the past two days, the incident has become a mass riot manipulated by a small number of people, from an activity through which the public was expressing their opinions, ” the letter added.

It hasn’t been decided whether the factory will be built in Dongshan County or not; future decisions on the issue will be made scientifically, and with respect to the livelihood of the people, said the letter.

It also said that the reason why the factory was removed from Xiamen is not because it will produce chemicals, but because it doesn’t fit the zoning plans of the area. 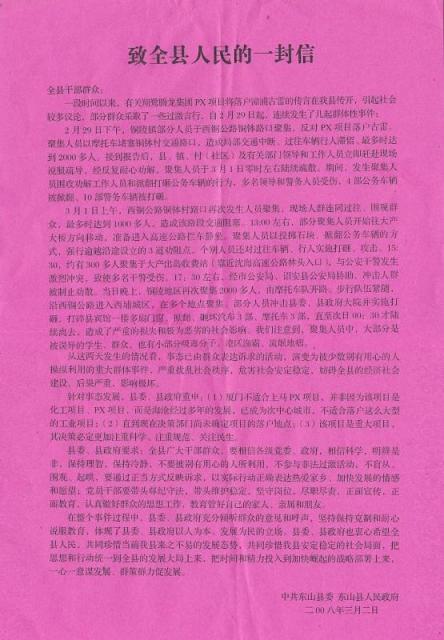