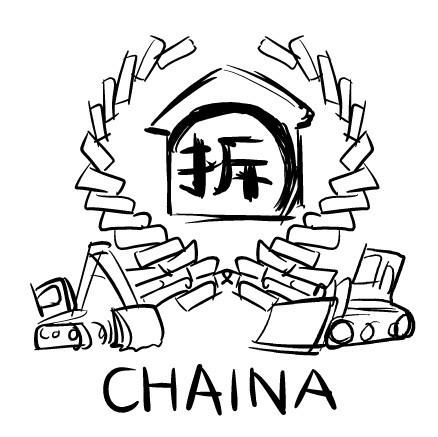 Cartoonist Rebel Pepper posted this reinvention of the Chinese national emblem on his Tencent Weibo. Crescents of bricks replace stalks of wheat; where stately curtains once hung now stand a bulldozer and excavator. In place of the gate tower leading to the Forbidden City is a house marked “demolish” 拆. This is Chaina, the torn-down land.

Local governments can turn a quick profit by selling land to developers. No matter if that land is currently occupied. Forced eviction and demolition cause enormous domestic strife. It was the prime factor in the Wukan revolt last winter, and most recently of protest in another Guangdong village, Zuotan.