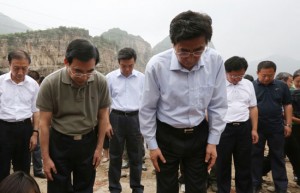 As of July 27, the following search terms are blocked on Weibo (not including the “search for user” function):

Wang Anshun and Guo Jinlong: Guo, who resigned as mayor of Beijing on Wednesday, has already taken the post of Municipal Communist Party Secretary as planned earlier this month. He and acting mayor Wang Anshun publicly mourned the flood victims today [zh].

See related lists of sensitive words from July 25 and 26.