The China news cycle has been dominated by anti-Japan protests following the Japanese government’s purchase of three Diaoyu Islands. This week, Drawing the News looks at netizen cartoons tackling this and other timely issues, as well as some more timeless problems in China. 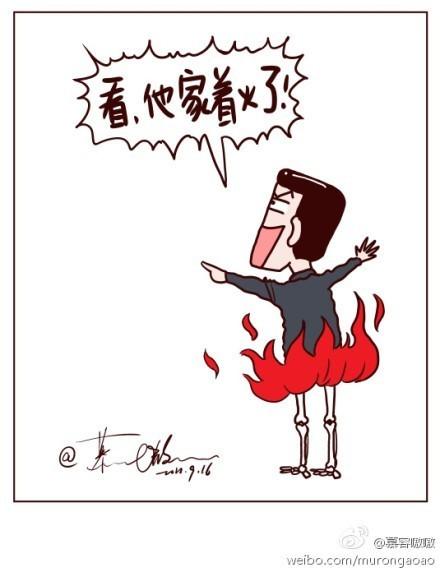 As his body is consumed by flames, a man in a sports jacket shouts, “Look, someone’s house caught on fire!” Cartoonist Murong Gao’ao is making a dig at “a certain TV channel” which has played up the reaction to the incendiary YouTube film The Innocence of Muslims. Murong writes on his blog, “I watched a little TV on the subway last night. It was still focused with the utmost intensity on anti-American protests and riots in the Arab world. I really wanted to pat them on the shoulder and say, ‘Yo, bro, we have that here, too.’”

The world is dancing to “Gangnam Style,” Korean pop star Psy’s whimsical music video. Psy taught Ellen Degeneres and Britney Spears his moves and has inspired reactions in Utah and remakes in Mongolia. Here, Shimao catches the Gangnam Style bug, dancing his way through New York, Paris and Tokyo. But what is Shanghai style? Our friend has been committed to a mental institution for “involvement in multiple activities,” “running crazily all over the place” and being a pig. 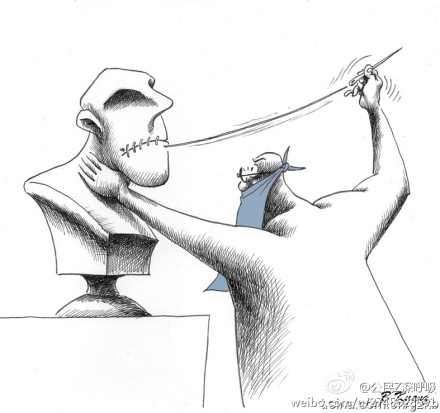 Is this a surgeon suturing a “wound” or a bandit shutting up his victim in the middle of the night? One netizen interprets this cartoon with his own caption: 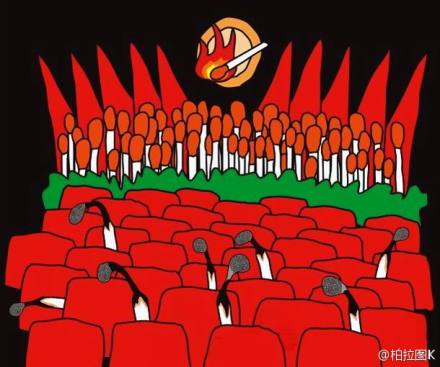 Posted on Weibo by @PlatoK (@柏拉图K), this anonymous cartoon shows old matches wilting before the newest stock. Above the stage, a lit match hangs where you would expect to see the hammer and sickle. It seems to allude to the 18th Party Congress, where the used-up will make way for the new leadership. But is the system destined to burn itself out in one bright flash?