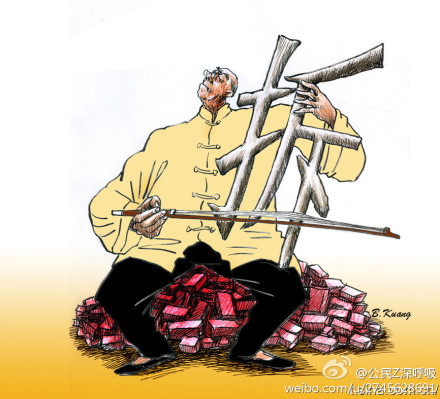 Netizens don’t just write colorful comments on Weibo critiquing Chinese politics and society. Many netizens are also cartoonists, getting away with more in pictures than they could in words. Their cartoons often speak for themselves; other times, people write captions for them as they circulate online. CDT Chinese collects these cartoons and captions. Now the translation team is bringing them to CDT English.

In this first installment, CDT has rounded up a few cartoons posted on Weibo this summer:

A man sits on a pile of bricks while playing an erhu (two-stringed instrument) in the shape of the word “demolish” (chai 拆). Building demolition is a sadly common trope in contemporary China. Old neighborhoods are razed to make way for high rises, many built on pure speculation. Local governments can turn a quick profit by selling land to real estate developers. The authorities don’t always wait for land to be unoccupied before they let the bulldozers in.

One netizen provided a caption that sounds like the song of the smirking musician, lamenting the city of Changsha, Hunan that was:

A man wrings tax revenue (税收) out of private enterprise (民营企业) like blood out of a fish. Benevolent Brother adds his own caption on Weibo: “There’s always some squeeze!” (挤挤总会有的！) Small business owners can get drained by the government. The situation is worsened by efforts to keep China’s economy strong in the face of global slowdown. Hefty taxes lead to riots in a Zhejiang town last October.

The character “person” (人) walks with shackles. The text below its “feet” reads, “Why is it so difficult to keep pace when marching towards the truth?” (为什么迈向真相的步伐总是那么困难) China’s selective enforcement of the rule of law lets official corruption run rampant while holding back lawyers, activists and ordinary citizens.