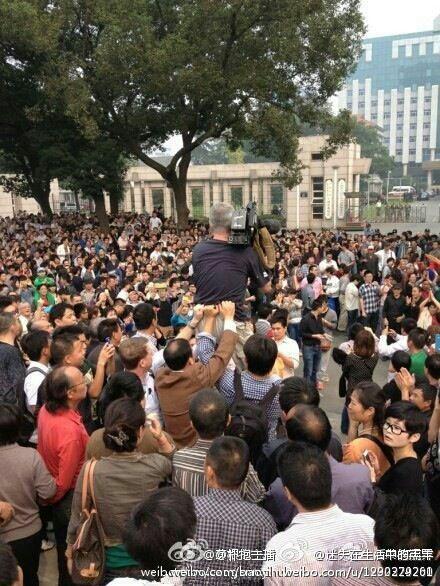 Most Chinese media kept silent on protests in the coastal city of Ningbo, where a planned expansion of a petrochemical plant processing paraxylene (PX) is now postponed. Except for a trickle of coverage from official news agencies, most have depended on Weibo and online forums to stay informed. Foreign journalists have become heroes, not only by covering the protests but for subduing the police by their sheer presence; one protester warned “after you leave, they will start beating people up.”

Angus Walker, the China correspondent for British ITV, has especially stood out. His on-the-spot tweets (@anguswalkeritv) were translated by netizens and posted to major Chinese social networking sites and forums. An ITV cameraman at the scene with Walker was hoisted up by protesters so he could film over the crowds. Netizens are now saying that “Western” journalists (洋记者) have shown themselves to be “family” to the Chinese people.

Below are a selection of translated comments from Weibo, followed by photos from the scene of the protests. More comments are available from CDT Chinese.

Brenden: According to what’s being said online, when foreign media appeared at the scene, people applauded continuously. Many people wept. The foreign reporters also greeted the crowd with palm over fist and wept. How sad this is! What gives the people of Ningbo hope is not the government, not the police, nor the media, environmental protection slogans, or the national anthem, but Western reporters…

SongWaimai: EssayistWangShengqiang: Such a huge event happened in Ningbo, but not a single domestic media group was there to report on it. A foreign media company went there and was welcomed by the people like family. The crowd was blocking the cameraman’s view, so the crowd spontaneously lifted him up. This reminds me that when the Eight-Nation Alliance attacked the imperial city, the people of Beijing held ladders for the troops. “If a country doesn’t recognize its people, then the people won’t recognize country.”

HeGuangwei: Seeing the people of Ningbo clustered around those foreign reporters to protect them, I feel sick to my stomach. China is just arriving at the peak of its news production, but there are too many news-killers. Nowadays in China, there are people in the media, but no media. Media people are working in chains. This is the sorrow of the Chinese people.

ZhanJiang: Actually, it’s okay that CCTV put great effort into covering the hurricane in the U.S. We should salute those field reporters. But the point is, you can’t report freely overseas yet act the other way in China. It’s just like what netizens wrote two years ago when the new CCTV building was on fire: “CCTV is emotionally stable and continues to cover the forest fire in Australia.”

Livinggame: A foreign reporter named Angus Walker has earned his fame. He rushed to the front line to report. Countless Ningbo people have remembered him. He is their savior. The special police and the armed police were terrified and withdrew at his presence, protecting a huge crowd.

ZhaoManqiu: The cruelest words of the 21st century: After you leave, they will start beating people up. Protesters hoist up an ITV cameraman.

A plainclothes officer confiscates a foreign journalist’s equipment on October 29.

Netizens are engaged in a “human flesh search” for the officer, who grabbed the reporter by his backpack.

A journalist is pulled away by plainclothes officers.

The spot where the journalist pictured above was grabbed. His equipment was left at the scene.

(1) Palm over fist: A traditional gesture of greeting and respect. Back.

(2) Netizens reported that the Ningbo Public Security Bureau Deputy Director shouted at protesters, “Anyone who sings the national anthem will be arrested.” Back.