As of June 23, the following search terms are blocked on Sina Weibo (not including the “search for user” function). 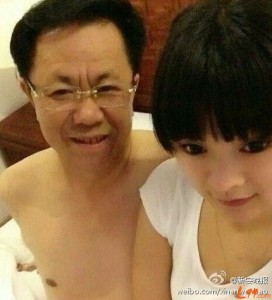 Mystery Cadre and His Mistress: An anonymous netizen posted amorous photos of a man named Li Guangnian and his 18-year-old mistress from a cell phone he found. The post claimed Mr. Li is the director and Party group secretary of the “Commission of Inquiry on Domestic Dynamics,” part of the Central Committee Party School’s “Scientific Concept of Development Research Society.” The Party School says Mr. Li has no affiliation with it and that the institutions named by the netizen do not exist. Hong Kong’s Wen Wei Po reports [zh] the young mistress was treated “no worse than Ji Yingnan,” the former mistress of cadre Fan Yue.

GM Soybeans Coming to China: Monsanto stock jumped 4.53% today after China approved the import of genetically modified soybeans from Brazil and Argentina, including Intacta RR2 PRO. But the National Business Daily (每日经济新闻) noted that at least as of May 20, the Ministry of Agriculture had not yet received the application for the approval of Intacta RR2. Yang Xiaolu, a Beijing resident and activist for open information, says the speed of the process leaves suspicions about the legality of approving Intacta RR2 for import.

• Sun Zhengcai+Monsanto (孙政才+孟山都): In 2009, then Minister of Agriculture Sun Zhengcai met with Monsanto CEO Hugh Grant and reached a “common understanding,” the details of which remain unclear. Mr. Yang wrote an open letter to the Ministry of Agriculture [zh] this March asking for an account of Sun and Grant’s agreement.
• Sun Zhengcai+genetic modification (孙政才+转基因)