Word of the Week: Tomato 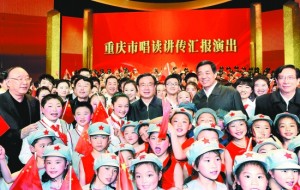 Sounds the same as “western red city” (西红市 xī hóng shì). During his tenure as Chongqing Party Secretary, Bo Xilai created an ambitious program to encourage residents to sing “red songs.” Bo’s charisma and embrace of the Mao-era culture captivated China and the world. Former U.S. Secretary of State Henry Kissinger visited the “western red city” in the summer of 2011 and watched a mass performance of red songs—just months before the murder of British businessmanNeil Heywood which would strike down Bo’s star.