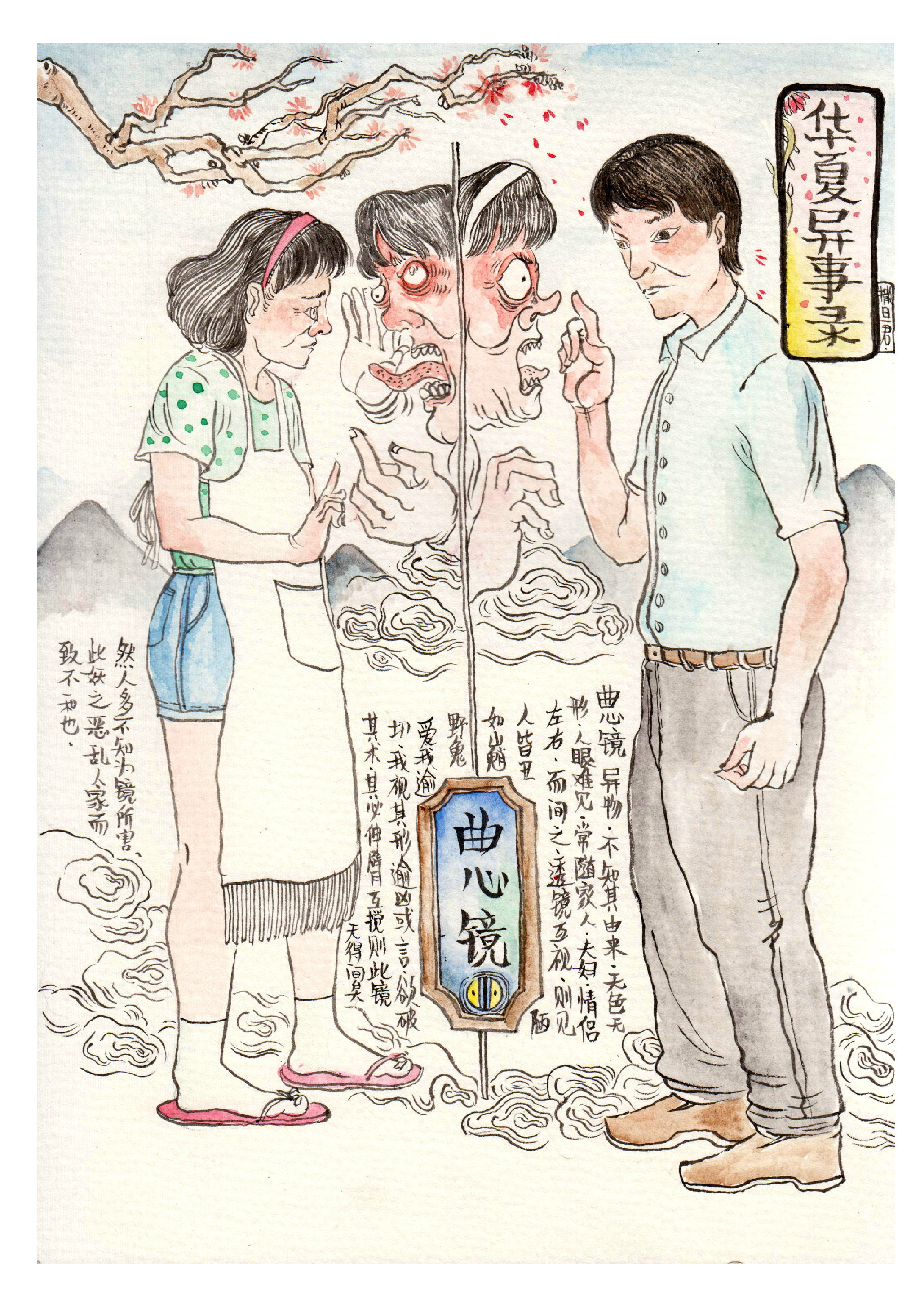 Satan Lucky (@撒旦君_Satan) has created a menagerie of monsters in modern China, the “Strange Creatures of Cathay” (华夏异事录). Rendered in the style of Japanese “floating world” (ukiyo-e) paintings, these creatures haunt coal mines, poison restaurant utensils, and steal postcards for lunch. Every demon portrays a social ill that menaces Chinese citizens’ everyday lives. “When you think for yourself, you want to express something with a link to the time that you are living in,” Satan Lucky explains in an interview with Danwei.

Crooked Mirror: Rare, origin unknown. Colorless and shapeless, hard to see with the naked eye. Gets in between families, couples, and lovers. When you both look into its surface, you see each other’s ugliness, like that of wild mountain demons. The more you love someone, the more ugliness you see. To break its spell, you must spread your arms and embrace each other, preventing the mirror from interfering with your relationship. But many are unaware they are under the mirror’s spell. The demon sows discord and ruins families.

Under-table Taotie: This monster roams the entire country, yet these days no longer hides under tables. Years ago, it would lurk under tables and reach its myriad hands into pockets to rob people of their wealth, then go to the market to buy all the food in sight. When the monster feasts, everything goes in and nothing comes out. It is insatiable. Many have fallen prey to this temperamental creature. Sometimes a few are captured, but the rest always creep out of their hiding places.

Government officials are those “monsters under the table,” financing banquets with taxpayer dollars. Xi Jinping is cracking down on such extravagances in his anti-corruption campaign, but previous attempts have failed.

Old Heart-Seeker: This monster once had a round heart, but it was lost. It lingers around cities on rainy days in search of round objects. It especially likes all shapes and sizes of manhole covers, but they are too large for his heart. It exchanges these covers for coins, but the coins are too small to fill the void where his heart was. Manhole covers around the city disappear, and people fall to their deaths.

Open manholes are often sold for scrap metal in Chinese cities. 240,000 manholes have gone missing in Beijing since 2004. Both Beijing and Changsha, the capital of Hunan, have recently installed trial safety nets in manholes to prevent injury. In Hunan, a 21-year-old college student and a two-year-old boy both died this spring after falling into open manholes.

Earth-worm: Very long, multiple mouths, insatiably greedy! It feeds on soil and hides underground. It bores through the earth to feast on humans, creating huge holes in the ground. Its saliva is like fire. You never know when and where it will appear. If you encounter one, you’ll escape with grave wounds, if you escape at all.

Drum Demon: Once upon a time, there was a drum in front of a government building, but its drumsticks were hidden. One day, a man came who wanted to strike the drum and air his grievances. Suddenly, his mouth was sealed, his ears were stuffed, his eyes were covered, and a small drum was placed on his back. He continued to complain loudly until the small drum jumped up and summoned a large drum that then engulfed the man. Several days later the man was sent back home, only to end up in a psychiatric hospital. This monster is frequently found in the imperial capital.

Since imperial times, anyone could go to the capital to air a grievance that local officials have failed to address. In recent years, local governments have often thwarted efforts to bring complaints to Beijing by detaining petitioners in black jails. Petitioners have also been forced to undergo psychiatric treatment.

Arhat of Records: Often found at historic sites, tucked away where human eyes cannot find them. When people engrave their names on these ancient relics, the arhat records their names. Write your name once and you will have headaches, diarrhea, and other symptoms. Write your name multiple times and you will go to the Avīci Hell when you die. If you carve both your name and your lover’s name, the two of you will undoubtedly break up.

This May, a Chinese teenager wrote “Ding Jinhao was here” in a temple in Luxor, Egypt. Angry netizens shared a photo of the damage, while Ding’s parents wrote a public apology.

Avīci is the lowest realm of Hell in Buddhist tradition, a place to punish crimes so terrible that it takes eons to reincarnate at a higher level–if at all.

Infant Frog: Named for its call, which sounds like an infant’s cry. Can be seen on the outskirts of towns on rainy days. With the head of a baby and the body of a frog, its mournful cries sadden anyone who hears it. For ten days, it cries without stopping. According to some elders, this creature is the form of deceased babies who are unable to reincarnate. It was seen for the first time nearly 40 years ago! It is uncertain how many there are now.

In Mo Yan’s 2011 novel Frogs, a woman who performs forced abortions is visited by a strange plague. An excerpt of Frogs was published in Granta last year.

Twenty-five: Warriors and heroes have battled this ox. Sometimes I draw something with a little “positive energy.” Ha ha ha. Several years ago this monster roamed freely at every train station. Once everyone worked together to fight this beast, it fled without a trace. What a happy scene it was! Nowadays, the beast only appears intermittently near hospitals, tourist sites, and theaters.