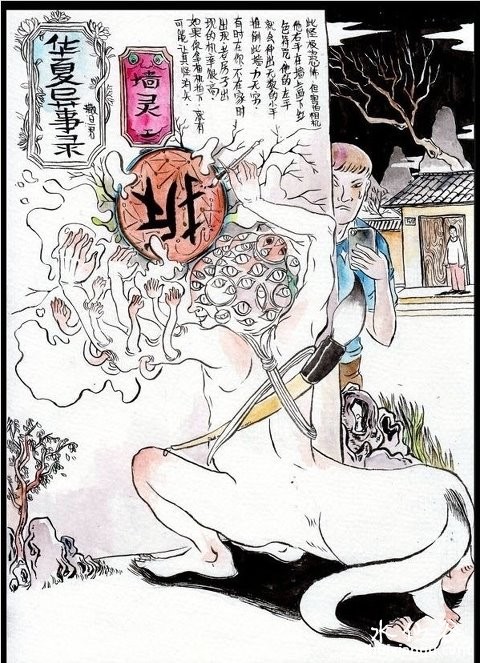 Satan Lucky (@撒旦君_Satan) has created a menagerie of monsters in modern China, the “Strange Creatures of Cathay” (华夏异事录). Rendered in the style of Japanese “floating world” (ukiyo-e) paintings, these creatures haunt coal mines, poison restaurant utensils, and steal postcards for lunch. Every demon portrays a social ill that menaces Chinese citizens’ everyday lives. “When you think for yourself, you want to express something with a link to the time that you are living in,” Satan Lucky explains in an interview with Danwei.

WARNING: Some images are graphic and may be disturbing. 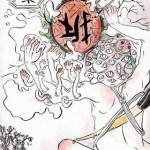 Wall Spirit: This demon is extremely terrifying, but is afraid of cameras. It uses its right hand to paint a red incantation on walls. Countless tiny hands emerge from its left arm, which topple the walls it marked. Its power is immense. This demon often appears when you are not at home, and is especially seen around old buildings. If you can take a picture of this beast, it will likely disappear.

The wall spirit’s incantation is “demolish” (拆), seen on buildings all over China that are about to be torn down. 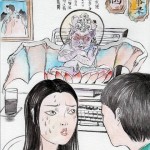 Four-o’-four: The monster known as the four-o’-four frequently appears in mainland China. Whenever you are trying to access FACExxxx, YouTxxx, and similar websites, the four-o’-four will undoubtedly emerge. It’s not hard to conquer this beast, however. There are many exorcists which can already defeat it. 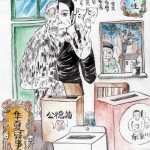 Tiny-handed Mangle-Face: This monster is expert at transforming its appearance. It often turns itself into a man with long, slender hands. From each finger of his hands grow five more fingers. These hands are adept at withdrawing money from donation boxes in the middle of the night when no one is around. Once again a teenager has snapped a photo of him. Absolutely sickening.

The public first lost faith in the Red Cross Society of China when Guo Meimei claimed on Weibo to be the “General Manager of Red Cross Commerce.” The Red Cross took another hit after the earthquake in Sichuan this spring, as Guo resurfaced on Weibo and the society faced another shortage of donations. 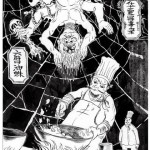 Greasy Six-armed Spider: Usually found in underpasses and ditches, it likes to bathe in ditch oil. When meal time arrives, it will be on the ceiling looking on as the chef cooks. The oil from its head and body drips into the cooking pot. Most chefs know about this spider, but no one ever says a word. 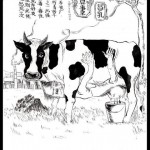 Substitute Milk: This monster makes up one percent of the dairy cow population. It produces milk with varying degrees of toxicity. Existing technology cannot detect the poison it secretes. This monster appears once every several months.

Scandals involving unsafe dairy products have emerged periodically since 2008, when at least six infants died after drinking melamine-tainted baby formula. Melamine, often used in plastic products, was added to Sanlu milk powder because it appears as protein in tests. 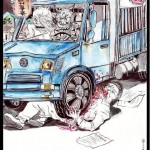 Night Car Ghost: This demon drove a pickup truck in the middle of the night and ran over Village Chief Qian and Farmer Song. They died horrific deaths. Strange incidents like these frequently occur. All the villagers are terrified. Everyone is afraid to go out at night. No one has the courage to speak out. 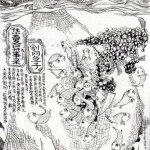 Net-cutting Roe: Before he passed away, an old man once told me that back in the 1970s, swarms of yellow croakers would come to the Zhoushan Islands every third month of the lunar year to breed and lay eggs. Because fish roe is a delicacy, fishermen competed with each other to catch these fish. Several years later, the yellow croaker population dropped dramatically, until there were no more left for the fishermen to catch. From what I’ve heard, the fish’s unfertilized eggs turn into spirits to set fish free by cutting nets open. These fish spirits live in the waters along the southeastern coast.

Yellow croaker were overfished in the 1970s and are now difficult to catch in the wild. The World Wildlife Fund Seafood Guide for Hong Kong recommends that consumers avoid eating yellow croaker. 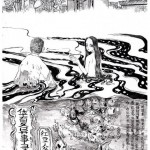 Red Bean Mermaid: I’ve heard that a monster appears in the rivers that flow by chemical plants. This monster is a manifestation of all the fish that died in the river. She uses poisoned river water to make red bean soup. The soup’s fragrance lures men to drink the soup and visit the mermaid. Several years after the encounter, these men will die of cancer.

When groundwater in Cangxian County, Hebei turned red this March, Deng Lianjun of the local environmental protection bureau told residents the water was still safe to drink. “The color does not mean the water is polluted. You know, after boiling with red beans the water has that color, too.” Deng lost his job over this remark. A local chemical plant claimed responsibility for contaminating the water. 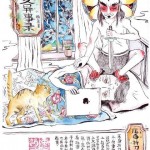 Knife Boy: Although he is of small stature, the knife boy is as heavy as a mountain. He usually appears on couches and beds. When you pick up your iPad or cell phone to play games and check Weibo, he will sit on you and immobilize you with his weight. His left hand wields a sharp blade, while his right hand forces you to play and browse nonstop!