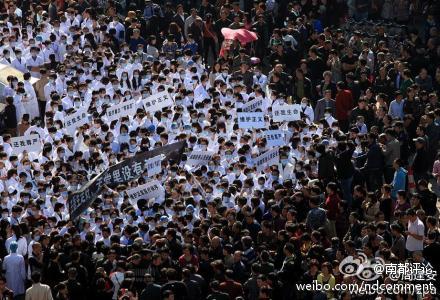 FreeWeibo gathers Weibo posts (weibo) that have been censored from Weibo itself. Among those weibo collected on October 28 are comments on the protest at Zhejiang’s No. 1 People’s Hospital, as well as on CCTV confessions by Big Vs like Charles Xue and journalist Chen Yongzhou:

来自天使之城: #mourning&commemoration In this Celestial Empire, anything can be branded as stability maintenance: forced demolition is stability maintenance; chengguan beating a street peddler is stability maintenance; even occasions for disaster relief like Yuyao‘s typhoon-force rain become opportunities for suppression. At Wenling Hospital, an innocent doctor has been killed, yet they are not ensuring the safety of the hospital or quality of the medical environment, and they are not punishing the perpetrator. Rather, they come to grab the body, prevent mourning, “stabilize” the family members–Where is the justice in this? | Related News: “A Life Changed by a Medical Procedure”

米思特蔡: The funeral procession for Doctor Wang Yunjie, the late chairman of Wenling People’s Hospital, was originally scheduled to take place on October 28 at 9:30 a.m. However, the authorities are pressuring us to hold the funeral this afternoon (October 27), while a whole bunch of police wait outside the door. We are enraged!

南都评论: #SouthernMetropolisEveningBell When facing violence, this doctor was the victim; but in the face of this cold model of local stability maintenance, he was even more defenseless. When doctors, whose duty it is to save lives, are left without a sense of safety, when they are left without any dignity in the face of brutality and power, then calls to protect doctors will be limited to the doctor-patient relationship, and the real problem will be left unsolved. The tragic fate of this doctor reflects the plight of all Chinese citizens. In essence, this is a Chinese problem. | Related News: “Wenling, Zhejiang Hospital Medical Workers Band Together to Protect the Body of Slain Doctor”

隆裕太后: From Xue Manzi [Charles Xue] to Dong Liangjie and Chen Yongzhou, you’ve taken each of these yet-to-be-tried suspects and put them in front of a camera to confess their guilt. You’re in the wrong! You are wrong because this violates fundamental principles of the presumption of innocence, respect for the individual, and respect for the relevant laws and regulations of China. Perhaps these people’s crimes and confessions are true, and perhaps they are fake or forced. Anything is possible before a trial. That’s why we have presumption of innocence. That’s why suspects are innocent unless proven guilty. That’s why, CCTV, you’re wrong!

Environmentalist Dong Liangjie was detained in mid-September, and later confessed on CCTV to posting “sensational” news about food safety online.