What Do Chinese Want From the Third Plenum? 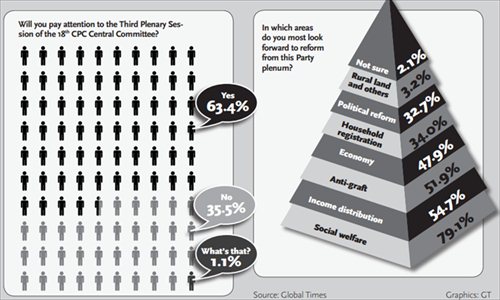 As the Party’s Third Plenum approaches, the Pew Research Center’s Jacob Poushter looks at recent polling for signs of what issues ordinary Chinese are hoping to see addressed. He focuses on inflation, corruption, inequality and environmental and social issues.

Inflation – Rising prices are seen as a very big problem by 59% in China, according to a spring 2013 Pew Research Center survey. When asked which is the issue most important for the government to address first, 53% of the Chinese public said inflation, while 26% named inequality and only 11% cited unemployment. Inflation shot up to 3.1% in September, making it a pressing issue for China’s Communist party elite.

[…] Inequality – Just over half in 2013 (52%) said that the gap between the rich and the poor was a large concern, according to the spring survey. Earlier this year, Chinese officials released an updated Gini coefficient of .474 (a measurement of inequality where 0 represents perfect equality and 1 equals maximum income inequality), down from a peak of .491 in 2008. Many were skeptical of the accuracy of this rating, but Pew Research polling shows the number concerned about inequality has fallen since 2008, when 72% said it was a very big problem. [Source]

Global Times ran a poll specifically focused on hopes for the meeting, and reported that while there is a strong appetite for change, most Chinese feel that there are more pressing concerns than political reform:

In the multiple-choice survey on what respondents hoped from the plenum, reforms on the social welfare and social security systems, income distribution system and anti-corruption mechanism led the votes.

[…] In comparison, only about 33 percent of the respondents chose the political system as their desired area of reform.

The result shows that while political reforms are aspired for by people mainly from the elite class, the majority of the public pay more attention to issues that are related to their livelihood, said Xu Yong, dean of the Research School of Politics at Central China Normal University.

[…] For the obstructions to reform, over 45 percent of respondents regarded some local authorities’ disobedience of central government’s decrees as a major source, while about 30 percent of them blamed vested interest groups. [Source]