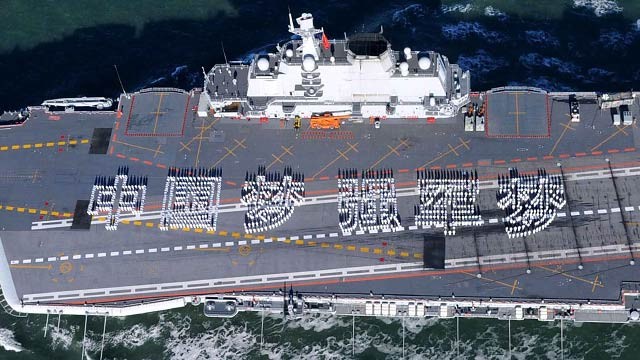 “The Chinese dream, the dream of a strong military.” While the “Chinese dream,” Xi Jinping’s catchphrase, is vague around the edges, it has a clear focus on making China a strong player on the world stage. Unlike the American dream, which centers on individual fulfillment, the Chinese dream is often mentioned in the same breath as the “great rejuvenation of the Chinese nation.” Evan Osnos explains in an Asia Society video that a main tenet of the Chinese dream is

“…pride in the nation. And this is where this begins to get into foreign policy. Because what they’re saying is as a Chinese citizen you should be proud of your country and its ability to stand up for its rights and its interests and its ability to repel incursions from abroad.” [Source]

This point is driven home by recent photos of naval officers standing in formation on the deck of the Liaoning aircraft carrier to form the words “the Chinese dream, the dream of a strong military” (中国梦 强军梦). The images have appeared on the homepage of the Global Times and similar state-run publications. China has maritime disputes with Japan and much of southeast Asia.

The Global Times explains, “Naval officers forming words on the decks of aircraft carriers is a naval tradition. The U.S. navy has organized many such activities in the past” (海军官兵在舰艇甲板上排字是海军军队文化的一个传统，美国海军就多次举行排字活动). Some Weibo users write positively of the exercise:

大地先品-SamLuo: That’s awesome. Even though some people will no doubt ridicule them, you can see from those characters the quality of these troops, and it’s commendable.

Others do indeed ridicule:

CRH6: As I’ve said in the past, Chinese officials are the biggest U.S. fanboys in the world. Wherever the American imperialists have tread, we also must go.

一头活猪: If word formation is the game, the North Korean People’s Army is unrivaled in the universe.

为什么你要代替你爹: How about the frickin’ dream of constitutionalism—could that be the Chinese dream? What happens after the strong military? Suppressing the commoners?

In January, the liberal newspaper Southern Weekly intended to publish a New Years article titled “The Chinese Dream, the Dream of Constitutionalism.” The story was bowdlerized by censors at the last minute, igniting protests at the paper’s headquarters and beyond.

风熙晨: This is what happens when you’ve had plenty to eat and nothing to do. The military already supports enough artists. Don’t you guys start causing trouble now.