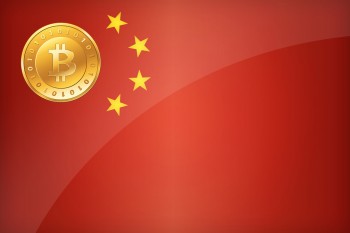 Bloomberg News reports that The People’s Bank of China on Thursday banned financial institutions from buying, selling, insuring or even quoting a price for Bitcoins:

Bitcoin plunged more than 20 percent to below $1,000 on the BitStamp Internet exchange after the People’s Bank of China said it isn’t a currency with “real meaning” and doesn’t have the same legal status. The public is free to participate in Internet transactions provided they take on the risk themselves, it said.

The ban reflects concern about the risk the digital currency may pose to China’s capital controls and financial stability after a surge in trading this year made the country the world’s biggest trader of Bitcoin, according to exchange operator BTC China. Bitcoin’s price jumped more than ninefold in the past two months alone, prompting former Federal Reserve Chairman Alan Greenspan to call it a “bubble.”

“The concern is that it interferes with normal monetary policy operation,” said Hao Hong, head of China research at Bocom International Holdings Co. in Hong Kong. “It represents an unofficial leakage to the current monetary system and trades globally. It is difficult to regulate and could be used for money laundering. I think the central bank is right to make this move.” [Source]

The statement from China’s central bank came just days after Chinese police in Zhejiang Province detained three people for allegedly operating a fraudulent Bitcoin trading platform. Analysts called the move a “restrained first step towards regulating” the virtual currency, which had been booming in China, though it remains to be seen whether Thursday’s announcement is a sign of more to come. From Reuters:

“This is an industry that will need to be governed or regulated. The safety and the well-being of the common user has to be taken into consideration. All this is expected,” said Ron Cao, Managine Director at Lightspeet Venture Partners, which recently invested $5 million in BTC China.

[…] “I would be cautious about jumping the gun and taking today’s announcement as indicative as how the space will be regulated in the future,” said Mark Natkin, of Beijing-based Marbridge Consulting.

“Once they have a better idea of how the market works and which players are likely to emerge as the leading players, then they’ll come out with firmer regulations, with more specific licensing requirements,” and possibly minimum capital requirements for firms entering the sector, he said. [Source]

Gwynn Guilford at Quartz, however, writes that the ban “doesn’t change much:”

That’s probably simply because it can’t. While the government could in theory block trading platform URLs, it can’t stop people from circumventing the Great Firewall to trade online (provided the platform accepts yuan, which Hong Kong-based sites can). [Source]