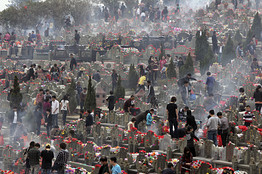 China’s campaign against official austerity has reached into the afterlife with a new notice against ostentatious funerals for officials and Party members. From Wayne Ma at China Real Time:

The official Xinhua news agency warned that party members’ lavish funerals are becoming “a platform to show off wealth and connections, with the degree of opulence and number of mourners symbolizing the ‘achievements’ of the dead, and setting a benchmark for competition among the living.” It also warned that in recent years as superstitious customs have seen a resurgence, the cremation rate has fallen, leading to some burials occurring on farmland—wasting natural resources and harming the environment. Some party members are even using funerals to collect large sums of money, it added.

“This has damaged the image of the Party and government, and ruined the social atmosphere,” Xinhua said. “This phenomenon is in urgent need of repair.”

The central government is ordering party members to lead by example and halt superstitious customs at funerals, Xinhua said, although it added that ethnic minorities will still be able to follow their own customs. [Source]

Ma adds that the instructions emerged the day after a successful IPO by Fu Shou Yuan, which has set its sights on domination of the “premium death care” market.

The clash between burial grounds and farmland came to a head in Henan in 2012, when Zhukou authorities began a campaign of farmland reclamation that trampled on traditional taboos against disturbing graves. Under pressure to lead the way, some local officials personally exhumed their own deceased relatives, leading to an accident in which two living family members were crushed.

While the rich use them to display their wealth, funerals and associated gift-giving can impose a hard financial burden on the poor. In Hong Kong, hyperinflation of “ghost money” burned to honor the dead has seen denominations spiral; but even a foot-long, rainbow-colored trillion dollar bill is subdued compared with a wailing professional mourner like Chongqing’s “Dragonfly” Mao.