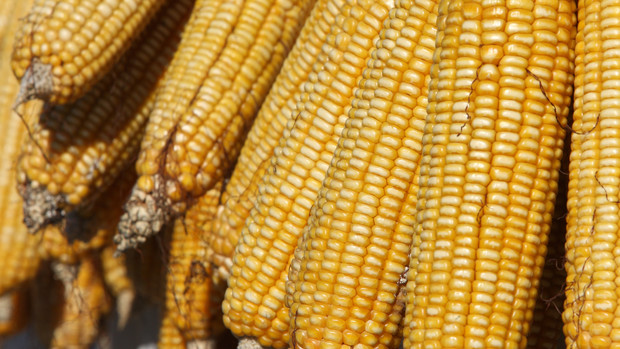 Reuters reports that, since mid-November, over 600,000 tons of U.S. corn shipments have been rejected by China for containing an unapproved genetically-modified strain:

China has rejected more than 600,000 tonnes of U.S. corn since mid-November, after tests showed an unapproved gene-altered strain, an influential consultancy said, taking the volume of such shipments to about 30 percent of imports this year.

The rejection of more corn by China, the world’s second-largest consumer of the grain, could further squeeze global prices that are hovering around a three-year low hit this month.

Ten cargoes, equivalent to about 600,000 tonnes, is six cargoes more than the number confirmed by China’s quarantine authorities by last week, private firm JC Intelligence (JCI) said in a report seen on Wednesday.

The United States has urged China to act promptly to approve the genetically modified strain MIR 162, developed by Syngenta AG, with high-level talks between the two sides scheduled in Beijing this week. [Source]

In China—a densely populated country with serious concerns surrounding food safety and food security—there has been much recent debate among policy makers about the use of genetically modified food. While some of this debate parallels global discussion of the unknown public health implications of tinkering with the genetics, politics are also fueling the dispute. The Economist reports on conspiracy theories common among Chinese opponents of GMOs:

Chinese anti-GM activists often describe their cause as patriotic, aimed not just at avoiding what they regard as the potential harm of tinkering with nature, but at resisting control of China’s food supply by America through American-owned biotech companies and their superior technology. Conspiracy theories about supposed American plots to use dodgy GM food to weaken China abound online.

They are even believed by some in the government. In October an official video made for army officers was leaked on the internet and widely watched until censors scrubbed it. “America is mobilising its strategic resources to promote GM food vigorously,” its narrator grimly intoned. “This is a means of controlling the world by controlling the world’s food production.”

[…] To the Maoists, opposing GM food is an urgent priority. Hardly a speech is made by one of them without mentioning it. “I support Mao Zedong thought,” shouted one of the protesters outside the agriculture ministry. The police usually treat them with kid gloves; unlike others who protest in public, they are ardent supporters of Communist Party rule. And on this issue, at least, the Maoists enjoy much sympathy; public anxiety about food safety has soared in recent years thanks to a series of scares. Of 100,000 respondents to an online poll in November, nearly 80% said they opposed GM technology.

At Bloomberg, Adam Minter describes more of the rhetoric used by both proponents and opponents of GMOs in China, outlines the reality of GMO use in the country, and puts the recently blocked U.S. shipments into context:

There is a serious divergence between the politics and the reality on the matter. Despite the occasional official anti-GMO rhetoric, in actuality China imports large volumes of genetically-modified soybeans, much from the U.S. (where most of the soybeans are genetically modified) — and has been doing so for years. Meanwhile, China has developed and commercialized domestic varieties of genetically-modified tomatoes, papayas and sweet peppers (as well as cotton and petunias). In the case of food, China requires labeling of GMOs, though the labels have their limits, such as at restaurants. As a result, many Chinese consumers underestimate the volume of GMOs in their food, and thus, the debate often lags behind actual situation in China’s kitchens and pantries.

[…] Considering how widespread GMOs already are in China, it might behoove government officials to start examining their tomatoes a little more closely, anyway. That pervasiveness, in fact, is what makes the anti-GMO justification for blocking the U.S. corn shipments so suspect in the first place. Yes, the strain of corn the Chinese claim is in those shipments has not yet been approved by the Chinese government. But Bloomberg News and Reuters are reporting that politics and trade tensions — and not human health — may be the real cause of the anti-GMO zeal expressed by China’s quarantine officials. If so, it’s a cynical but politically adept effort at pleasing a Chinese public skeptical of the government’s commitment to food safety without actually doing much about it. [Source]

The charges, filed in U.S. courts in Des Moines, Iowa, and Kansas City, Kan., outline efforts by the Chinese nationals to target DuPont Co. DD +0.84% , Monsanto Co.MON +0.03% and Ventria Bioscience Inc., according to court documents and industry officials. In one case, an employee of a Chinese seed company was discovered on a seed test farm in Iowa and months later was observed near a separate seed test farm, a court filing said.

The complaints cite Chinese citizens living in the U.S. and elsewhere but don’t allege involvement by the Chinese government. Yu Xueyong, a spokesman for the Chinese consulate general in Chicago, had no immediate comment.

One case involves corn in Iowa; the other, genetically engineered rice in Kansas. Court documents filed in each case (corn here, rice here) offer an entertaining mixture of Midwestern farming, alleged corporate espionage and a whiff of international intrigue.

The corn caper began with a curious confrontation more than two years ago, when a field manager for DuPont Pioneer, a leading seed company, found a Chinese man on his knees in a corn field near Tama, Iowa. This wasn’t just any corn field. Pioneer was using this one to grow what’s called an “inbred line” of corn. Inbred lines are the parents of the hybrid corn that seed companies sell to farmers, and they’re probably the most tightly guarded secrets in the business.

[…] The second case, involving genetically engineered rice, appears to be a much less sophisticated case of alleged theft. Weiqiang Zhang, a Chinese employee of of a company that court documents call “Company A,” is charged with stealing some samples of the company’s genetically engineered rice and providing these seeds to scientists in China. Our colleague Bryan Thompson at Kansas Public Radio identified “Company A” as Ventria Bioscience, based in Colorado Springs, Colo. [Source]