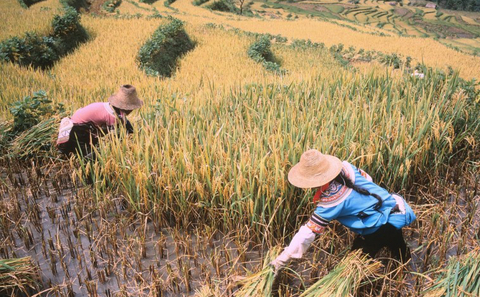 Since its early days, the PRC has aimed to be self-sufficient in its food supply. With continued urbanization efforts, an increasingly polluted environment, and perpetual food safety concerns, China is becoming more reliant on food produced abroad, and is expected to soon become the world’s largest wheat importer. China Dialogue’s look at China’s move away from self-sufficiency notes the political risks that come with increased imports, outlines the causes for the country’s degrading agricultural land, and describes the interests fighting against the adaptation of more sustainable farming methods:

Zhang Zhongjun, FAO’s Beijing representative, said local governments play a key role in promoting sustainable farming, yet they lack incentives to do so as agriculture traditionally accounts for a very small part of local growth.

“Quantity is still the top priority,” Zhang said. “They don’t care as much about the environment.”

Jiang said cadres are also unsure if sustainable agriculture can really improve production as those farming methods require more investment. “They [local governments] won’t support us,” he said. “The fertiliser and pesticide manufacturers tell them that our ways don’t work. We are showing them that they are wrong. Our production doubled in the fourth year.”

Local cadres are not the only ones unenthusiastic about sustainable farming. Farmers are unwilling to change their method of cultivation as the cost of doing so would cut into their small profit margin. A large number of people have abandoned  their fields to work in cities because of the unacceptably low price of grain. “China has to subsidise the farmers in a better way, ” said Zhang. [Source]

With local governments unwilling to invest in sustainable farming, entrepreneurs from other industries are starting to see profit in the void. The South China Morning Post reports:

It has been a four year-journey – one marked by mockery and doubt – for internet pioneer NetEase to bring its first pigs to market. You read that correctly – pigs.

The mainland internet pioneer is one of a growing number of companies better known for their manufacturing or online commerce sites that are dabbling in agriculture.

Growing public despair over a never-ending parade of food scandals – plus an eye for a commercial opportunity – has prompted these successful businesses to undertake what some might regard as risky, even reckless, adventures outside their areas of expertise.

[…] Professor Du Xiangge , who leads China Agricultural University’s Research Centre of Organic Agricultural Technology, said that despite the companies’ varying results, the trend of innovative investment in agriculture was a good sign, both for environmental protection and food safety. [Source]

For more on environmental degradation, food safety, and agriculture, see prior CDT coverage.