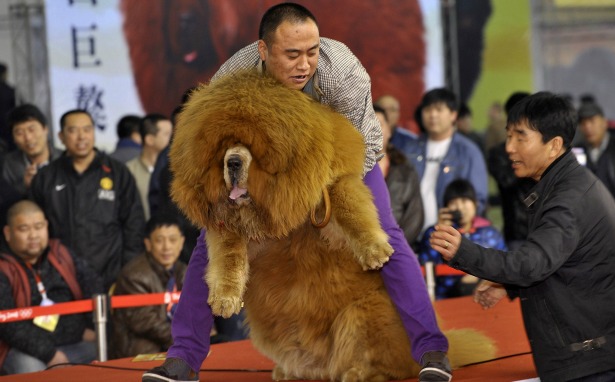 At The Atlantic, Damien Ma interviews the anonymous director of the soon-to-be-released documentary Oversized Dogs: Chinese Dog Laws and the People Who Break Them:

A central theme of the documentary is about this unfair and perhaps nonsensical law in Beijing that prohibits ownership of dogs larger than a certain size. How are the characters in your film fighting to overturn this law?

Some of my subjects try to use protests, petitions and Weibo activism to affect change. I am not sure how effective that is in China’s political climate. A few animal rights groups/NGOs ask people to avoid protests because marches and protests cause issues with the government. They would prefer that individuals wait for them to lobby directly. In any case, I think that just by owning and raising their oversized dogs, my subjects are effecting change. If dog ownership can hit critical mass, the Chinese government will have to reconsider the law. As it is now, those numbers are huge but not enough to make the government change. In addition, too many people are still scared of dogs, so that has been used as justification for the large dog ban.

[…] Throughout your research and interview for this documentary, what struck you as the most surprising or something you didn’t expect to learn?

What do you hope the audience to take away from this documentary?
I have two goals. First, I want audiences to see the human face of China through these dog owners. The sometimes shocking lengths people go to for their pets is heartwarming, funny, and sometimes tragic. Second, I want to show that while raising a big dog in defiance of these rules might seem like a small thing, it is in fact an important part of Chinese dissent. [Source]

Also see the trailer for the documentary:
[youtube]https://www.youtube.com/watch?v=p4tQdIppZBE[/youtube]
Read more about dogs in China via CDT.