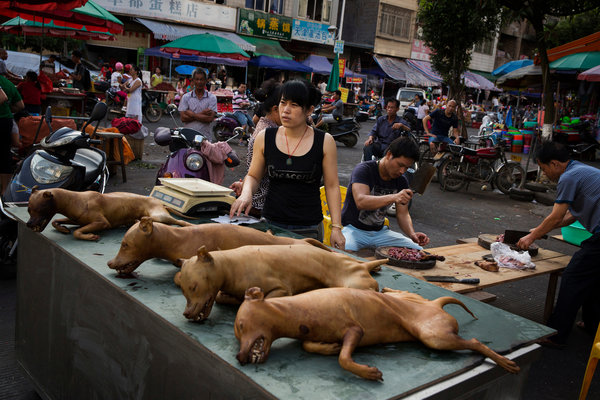 The annual Yulin Lychee and Dog Meat Festival in Guangxi Province has drawn increasing attention from animal rights activists in recent years. This year, a social media blitz condemning the festival helped bring it to international attention as well. Jennifer Duggan of The Guardian reports on the festival:

About 10,000 dogs are likely to slaughtered during this year’s event, which got underway on Sunday and marks the summer solstice in the town in south-west China.

Dog meat is considered a delicacy in some parts of China but there is increasing opposition to the practice as dogs have become popular pets among China’s growing middle class, particularly in affluent cities.

While the festival has been a focus of international outcry in previous years, opposition is growing in China, with a number of celebrities including actor Fan Bingbing adding their voices to an online campaign. Fan features in a video with a number of other celebrities holding signs saying: “Dogs are our friends, please don’t hurt them.”

Apparently concerned about the adverse publicity, Yulin’s local government has distanced itself from the festival, which has been running since 1995. Earlier this month, it announced that there was no official dog meat festival and that it was something that had spread among some traders and local people. [Source]

Animal rights activists have developed various tactics aimed at shutting down the festival and rescuing the captured dogs. Natalie Thomas of Reuters reports on Yang Xiaoyun, who has spent thousands of yuan buying dogs before they are slaughtered:

Yang, who comes from northern China, has returned this year with funds raised from around the country, but she would not say exactly how much.

She hoped to set up a home for the rescued dogs near Yulin, she said, undeterred by the prospect of any hostility there.

“At the moment we don’t have the ability to change people’s habits, this is the government’s responsibility, isn’t it?” Yang said. [Source]

The New York Times’ Amy Qin reports from the festival and talks to local festival-goers about their take on the protests:

Yulin, whose lush subtropical surroundings are said to be the birthplace of the legendary imperial beauty Yang Guifei, has become the target of a fast-growing animal rights campaign, which has made its residents feel increasingly under siege and at times defensive.

[…] The condemnation of Yulin has contributed to a growing us-against-them mentality here, with many people saying they are being unfairly singled out.

Locals say the moral hypocrisy over the eating of animals is a bottomless grab bag. What about the consumption of beef when cows are considered sacred in India, they say, or guinea pigs in Latin America, or dogs in Korea or turkeys in the United States? What makes eating dog meat any different from eating the flesh of chickens or pigs, they ask?

“I feel like the activists would be making better use of their time addressing issues like the global water shortage or kidnapped children instead of making things more chaotic here,” said Yu Ping, 48, a Yulin resident and a preschool teacher. Ms. Yu, like many residents, insisted that the dogs eaten in Yulin were specially farmed, while animal rights groups say that a large percentage of the dog meat comes from stolen pets or strays. [Source]

The New York Times also talks to Peter J. Li, an associate professor of East Asian politics at the University of Houston-Downtown and a China policy adviser with Humane Society International, about the festival and about animal rights activism in China:

What’s at stake in this debate?

A. A lot. This is more than an animal welfare issue. This is a matter of public health as well. After long-distance transport, most of the dogs are sick, dying or already dead. Skin problems are common. These are serious food safety problems and public health hazards.

Zoonotic diseases are another public health concern. Rabies can break out among traders after handling a large number of dogs with compromised health. My investigation found that most dog meat traders have not been vaccinated for rabies.

Guangxi is among the five top provinces in terms of the number of human rabies cases in China. Most of the cases in Guangxi have been reported in Yulin.

This is also about stopping the theft of pets. [Source]