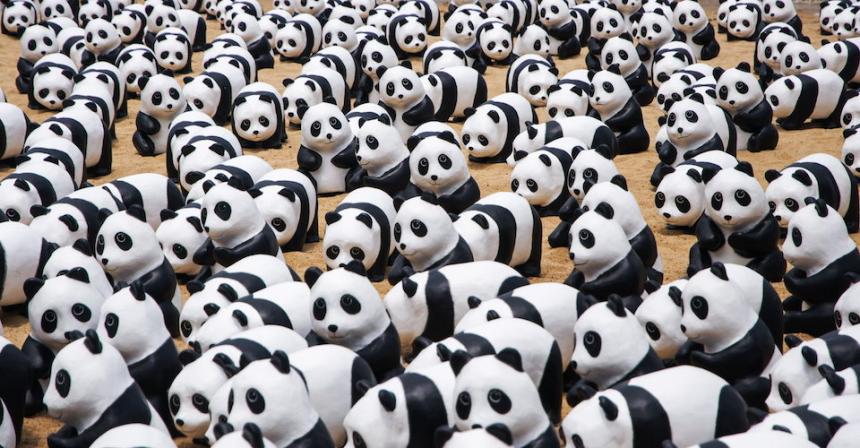 At Foreign Policy, Alexa Olesen describes the shift in Chinese views of pandas from metal-eating monsters to national treasures.

China’s love affair with the panda is in fact a fairly recent phenomenon, and while strong, is not symptomatic of a deep culture of animal protectionism. China has a dismal record when it comes to animal rights and conservation, and pandas are among a tiny minority of animals unlikely to end up in a Chinese soup pot somewhere. But the national embrace of the panda has inculcated a shared affection that could provide a template for saving other species in the future.

The elevation of the black and white bear to China’s national symbol happened gradually only over the last century. (There are 12 animals in the Chinese zodiac, which dates back over 2,000 years and includes the mythical dragon — but no panda.) Yiduiread, a news channel on the hugely popular WeChat mobile messaging platform, posted a sweeping overview of panda history in June with the headline: “Giant Panda: From Monster to National Icon.” In ancient times, the article said, Chinese people feared pandas and described them as metal-devouring black-and-white “tapirs,” an herbivorous mammal resembling a pig. The bears were known to descend from the mountains to forage for utensils made of bamboo, iron, or copper, and could chew the nails off a city gate, it said. In his 1993 book The Last Panda, U.S. biologist and naturalist George B. Schaller explained how Chinese used to hunt pandas for their pelts because it was believed that sleeping on panda fur could ward off ghosts and help regulate a woman’s menstrual cycle. They also thought panda urine could dissolve a swallowed needle. [Source]