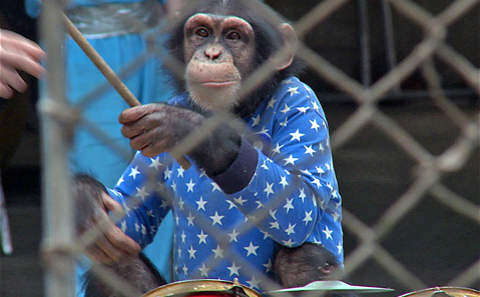 China’s central role in the global black market in ivory and other wildlife products has become well known. In an interview with Yan Dingfei at chinadialogue, wildlife photographer Karl Ammann explains how China’s booming wildlife parks and zoos have become leading destinations in the illegal international trade in live chimpanzees and other great apes, as well as elephants:

I visited six or seven zoos in China, and my assistant went to others. Everywhere we went we saw chimpanzees either locked in cages or performing on stage. There were even groups of chimpanzees locked up in a single cage. China doesn’t have experts on raising chimpanzees – you can’t put them together like that, as they come from different troops. They’ll kill each other. Chimpanzees are really suffering in China.

[…] At many international conferences I’ve asked officials from China’s office for the import and export of endangered species about this face to face: there are obvious errors on the import documents, are you really not aware of this? Just check online and you know right away something’s wrong: the export company doesn’t exist, or the country isn’t able to breed the animals. There have been cases where licences to import four tortoises to the UK have been changed to four elephants; or a permit for 5,000 parrots was altered to read 5,000 elephants, without even changing the number. [Source]