Hu Jintao’s Visit To Hunan: A Jab At Xi? 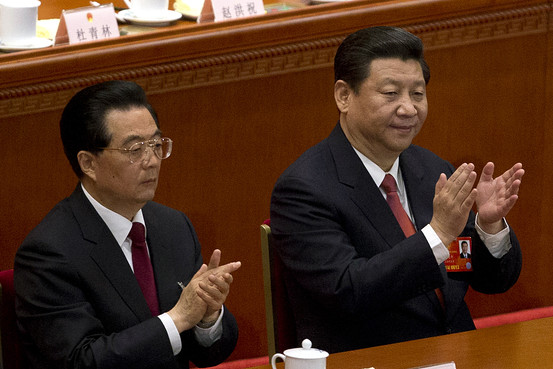 Former president Hu Jintao’s public visit to Hunan earlier this week may have been intended to show opposition to his successor Xi Jinping’s political strategy while defending his own legacy, Russell Leigh Moses writes at China Real Time:

It’s been clear for some time that Hu and his conservative allies are not fully onboard with Xi’s Party reform drive. While there’s little that’s liberal in Xi’s strategy, it’s designed to rid the Communist Party of many of the excesses that took hold during Hu’s tenure as Party chief. Xi’s crusade against corruption is not only aimed at improving inefficiencies; it’s meant to signal officials that what was tolerated under Hu won’t be allowed under Xi.

More space between Hu’s way of governance and Xi’s reform schemes have been evident in recent days, as Party commentary has mapped out Beijing’s reaction to a controversy over the industrial chemical PX in Guangdong and “other emerging social hot spots”— outbreaks of discontent with local policies and the officials that promote them.

Faced with similar challenges, the Hu leadership was keen on cracking down to promote social stability. The political line that Xi and his comrades have been struggling to shape instead acknowledges that clashes between the masses and the State, as one recent commentary put it, “reflect the challenges of transition in China [amidst] deepening reform…[that there are] rising expectations about development, growing rights awareness, [and] increasingly complex disputes between interests.”

Retired Chinese leaders will continue to try to play politics when they believe their legacies are being threatened, or they think that their protégés are being pushed around. [Source]