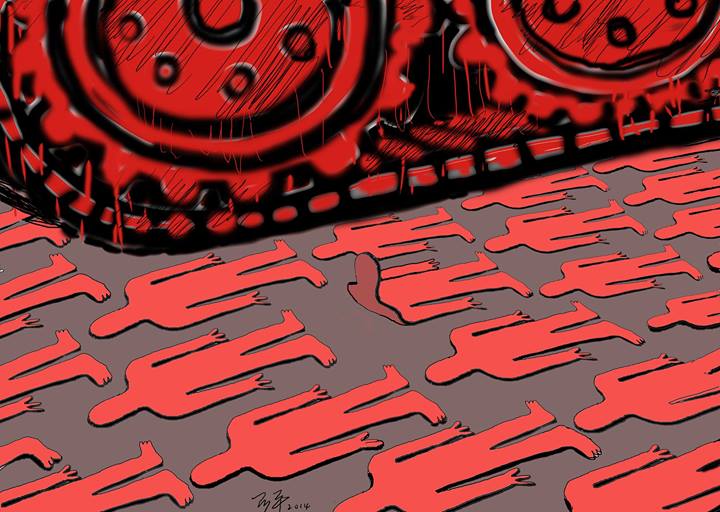 This week, CDT presents political cartoons, shared on the Chinese Internet, about a murder at McDonald’s, tightening security after the recent violence in Xinjiang, and the 25th anniversary of the crackdown on the Tiananmen protests.

Click any thumbnail to view the full image. Check out more of today’s cartoons at CDT Chinese.

A Murder at McDonald’s

On May 28, a female customer at a McDonald’s in Zhaoyuan, Shandong was beaten to death. The Zhaoyuan police arrested six suspects, who are alleged to be members of the “evil cult” of the “Almighty God.” Video of the attack and images of the woman’s body surfaced online, stirring debate about whether fellow restaurant patrons or staff should have intervened. Some are comparing this incident to the death of “Little Yueyue,” a toddler who was run over and ignored by more than a dozen pedestrians before an elderly woman came to her rescue. Others contend that it is too easy for the “Keyboard Party” (键盘党) to moralize, without knowing how they themselves would react in a similar situation. 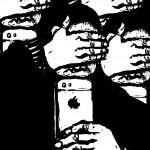 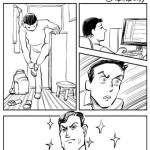 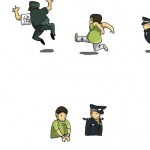 The cycle of violence: a temporary worker beats a peddler; a man records this and his own beating with his cell phone; an onlooker delivers justice, and is arrested. And then… Mengchenshang implies that endemic injustices lurk behind the murderers’ actions, not just the sway of an “evil cult.” (Mengchenshang 梦晨伤)

Central and local governments are tightening security after the recent spate of violence in Urumqi and Kunming. Many localities are easing restrictions on police carrying guns. Beijing has begun dispatching volunteer patrols and put in security checks at several subway stations. Liaoning residents now need proof of identity to purchase matches. Many netizens are concerned at these new measures to maintain stability are themselves quite violent. 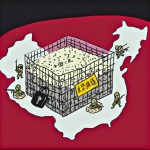 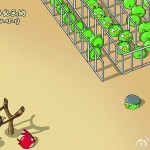 As subway riders queue for hours to go through security, are they just “sitting pigs” for a violent attack? (Mengchenshang 梦晨伤) 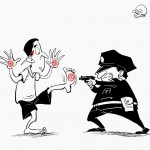 On the night of June 3 into the morning of June 4, 1989, the People’s Liberation Army put a gruesome end to two months of protests in Beijing and other cities throughout China. Cartoonists outside of China pay their respects to the dead and illustrate the living spirit of 1989. 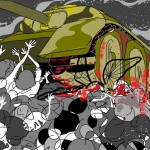 Even as they are crushed, protesters pull apart the tank. (Jiu’an 鳩鵪) 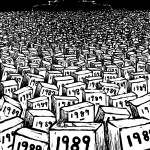 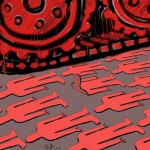 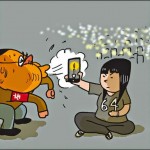 No amount of air will blow out this protester’s digital flame. Her shirt is emblazoned with the numbers six and four, standing for June 4th. (Zunzi 尊子)