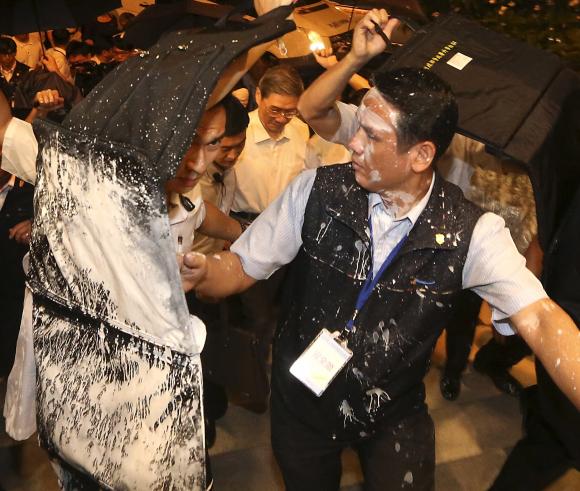 On his first, four-day visit to Taiwan last week, Beijing’s Taiwan affairs chief Zhang Zhijun worked on building ties with the independence-inclined Democratic Progressive Party. Another ostensible purpose of his trip was contact with the island’s public. He may have got more of this than he wanted: protests, echoing ones in the spring that included an occupation of the island’s legislature, forced the cancellation of some events. In Zhang’s subsequent statements on the trip, however, he played down any such discord. From Faith Hung at Reuters on Sunday:

Throughout his four-day tour of the island, Zhang was greeted by protesters, including at the high-speed train station in the pro-independence southern port of Kaohsiung on Friday. There hundreds of demonstrators gathered, some waving placards reading “Communist Zhang Zhijun, get the hell back to China”.

Protesters in the city became violent and at one point attempted to pour white paint on Zhang, but missed him and instead splashed security staff. Some protesters were bloodied after scuffles with police.

[…] Speaking to state media after arriving back in Beijing on Saturday, Zhang glossed over the protests and hailed the trip a success.

“This visit received an enthusiastic welcome from all circles and peoples in Taiwan. Despite differing voices, the popular will is extremely clear,” the official Xinhua news agency cited Zhang as saying. [Source]

“Of course, a minority of people have different opinions, and there were even some extreme actions which caused criticism in society and public opinion,” he told state media in comments posted on the Taiwan Affairs Office website late on Monday.

Zhang Xiaoming, the director of the Beijing’s liaison office in Hong Kong, echoed Zhang Zhijun’s comments after hundreds of thousands rallied to mark the 17th anniversary of the city’s return to China on Tuesday. “He believed the mainstream opinion is to maintain stable and harmonious development,” China Daily reported. “However, he is against the radical, unlawful activities of some groups.” (These matching responses aside, Beijing has exerted some effort to keep protest movements in Hong Kong and Taiwan separate.)

Zhang told Hau that maintaining positive cross-strait relations had become mainstream public opinion in Taiwan, Xinhua reported. Interaction and cooperation in all areas should be enhanced to bring more benefits to regular people on both sides, he was quoted as saying.

[…] Hau, a member of the island’s ruling, mainland-friendly Kuomintang, told reporters as he wrapped up his four-day trip Beijing should understand the diversity of public opinion in Taiwan.

[…] Yang Lixian, a researcher at the Institute of Taiwan Studies at the Chinese Academy of Social Sciences, said the protests against the trade pact showed Beijing had problems in accurately assessing public opinion in Taiwan. […] [Source]

But hearing the full range of public opinion was never part of the plan, The New York Times’ Austin Ramzy reported, while also providing details of the protesters’ complaints:

“I don’t oppose cross-strait dialogue, consultation or negotiations, but there should first be a clear mechanism for monitoring official talks,” Lin Fei-fan, one of the protest leaders, wrote on Facebook. “At the same time there should be a basis of equal status. If a guest comes from afar and harbors ill intentions, and even tells you that he’s not a guest but the master, then there’s no basis for treating him as a guest.”

Mr. Zhang met with a variety of groups, including students, farmers, retirees and local officials. But he was largely blocked from hearing critical voices, said Hsu Szu-chien, a Chinese politics scholar at Academia Sinica, a state-financed research institution in Taipei.

“They selected these grass-roots groups, but we don’t think they were representative of Taiwan’s overall society,” Mr. Hsu said. “It was very selective to create the image that Mr. Zhang is able to get access to people in different walks of life. It is propaganda.”

Taiwan’s civil society “has tried very hard to express our diverse opinions as best we can,” he said. [Source]

If Zhang’s mingling was propaganda, Aberystwyth University’s Gary Rawnsley argued at the University of Nottingham’s China Policy Institute Blog that it was at least more sophisticated than in the past, offering “yet further evidence of a complete transformation in China’s international communications strategy”:

Zhang’s visit is structured around many photo-opportunities to support his claim that his visit is designed to get a feel for the ‘ordinary’ in Taiwan, and the media have complied, for example by publishing photos of him enjoying lunch with senior citizens in New Taipei City. While I doubt that we will next see photos of any Chinese leader actually kissing babies, we cannot overlook the way this demonstrates the changes in the leadership’s understanding of how the media work; and I would argue it started when former Premier, Wen Jiabao, visited railway stations at Chinese New Year in 2008 to apologise for disruption to travel plans caused by adverse weather conditions. Before then, how many times did we ever see such a senior official engaging with any member of the public, let alone apologise to them and in front of cameras?

[…] Another dimension to this visit is how his tour is communicated to Chinese audiences in the PRC. They are told repeatedly that thiis a ‘historic’ four days, that the people of Taiwan have been looking forward to Zhang’s visit, they welcome him and expect Zhang will strengthen ties with the mainland; and that only a tiny minority of people (mostly students) have protested against his visit. These themes are repeated in China’s English language media, especially CCTV-N, bringing to the discussion of communications a distinctly international flavour. Chinese media have avoided in-depth coverage of the protests and Chen Chun’s explanation to Zhang that demonstrations are an expected and accepted feature of democracy. Audiences will also not learn of the sometimes violent means by which Taiwan’s police have chosen to respond to these protests, provoking claims among the KMT’s opponents that democracy is regressing – and which may ultimately undermine Taiwan’s own ‘soft power’. [Source]

China’s public diplomacy over Taiwan may be growing more refined, but it has suffered from the consequences of its actions at home, The New York Times’ Edward Wong suggested:

Activists Convicted in Guangdong and Chengdu