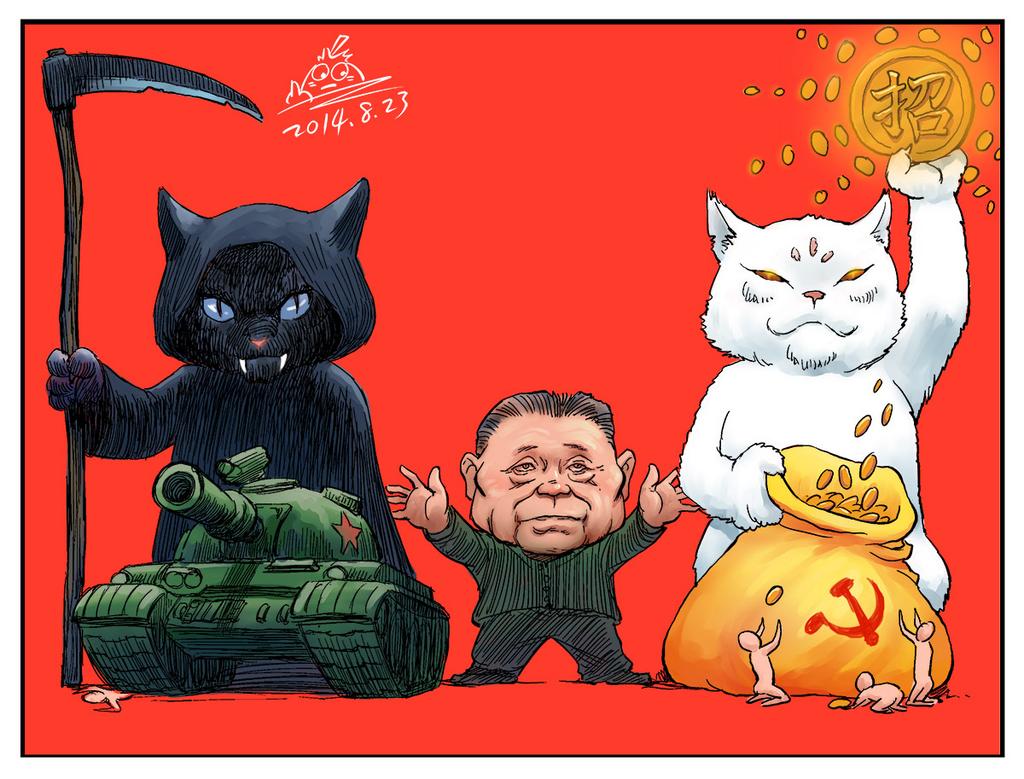 To honor the 110th anniversary of Deng Xiaoping’s birth, cartoonist Rebel Pepper (变态辣椒) served up a new cartoon on Twitter:

Had Deng Xiaoping lived until yesterday, he’d be 110 years old. As Chinese people at home and abroad offer commemoration, I’ve also drawn a cartoon to memorialize him, his great “Black Cat, White Cat Theory,” and the mighty shorty’s influence on China.

Deng Xiaoping’s reformist politico-economic theory is often summarized by the late leader’s maxim, “It doesn’t matter whether a cat is black or white, as long as it catches mice it’s a good cat” (不管黑猫白猫,捉到老鼠的就是好猫). Deng’s birthday this year comes amid the newly launched CCTV miniseries Deng Xiaoping at History’s Crossroads, which has been the cause of controversy due to its omission and revision of sensitive aspects of Deng’s tenure. Rebel Pepper’s cartoon uses the two-tone feline metaphor to represent sustaining points of contention about Deng’s career: the bloody crackdown on protesters on June 4th, 1989, and the culture of money worship ushered in by his sweeping economic reforms.

Rebel Pepper’s outspokenness recently made the cartoonist the target of a state media smear campaign. After posting a cartoon mocking pro-Beijing protesters in Hong Kong, state media highlighted social media comments about a trip to Japan which countered popular anti-Japanese sentiment so often encouraged by Beijing. Radio Free Asia notes that the cartoonist, currently in Japan, fears detention upon returning to the mainland. Last October, Rebel Pepper was briefly detained for sharing information about flood victims amid an ongoing crackdown on Internet rumors.