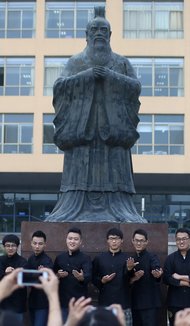 The University of Chicago in Illinois said in a statement that it had terminated its contract to run a Confucius Institute, a Beijing-affiliated language and research center whose curriculum and hiring practices are largely controlled by the Chinese government. More than 100 professors lobbied for the eviction of the Institute after concerns arose over Chinese government interference in academic freedom. From Inside Higher Ed:

The University of Chicago has suspended negotiations to renew its agreement to host a Confucius Institute after objecting to an unflattering article that appeared in the Chinese press. The decision follows a petition, signed by more than 100 faculty members this spring, calling for the closure of the institute. The petition raised concerns that in hosting the Chinese government-funded center for research and language teaching, Chicago was ceding control over faculty hiring, course content, and programming to Confucius Institute headquarters in Beijing, which is also known as Hanban.

The decision means that the Confucius Institute at Chicago will cease to exist when the current five-year agreement expires this Monday, Sept. 29, although its director, Dali Yang, said that the institute continues to support existing projects.

The article refers to an interview with Xu Lin, the director of Hanban and chief executive of the Confucius Institute Headquarters, whose comments antagonized the university. Didi Kirsten Tatlow at The New York Times reports:

The interview with Ms. Xu appeared in an article published on Sept. 19 in the newspaper Jiefang Daily, which is run by the Shanghai Communist Party Committee’s News Bureau.

The full-page article, headlined “The Difficulty of Culture Lies in a Lack of Consciousness,” described an incident it said happened in late April, after more than 100 faculty members at the university called for the Confucius Institute at the University of Chicago to be discontinued.

[…] “Many people have felt Xu Lin’s toughness,” The Jiefang Daily wrote admiringly, citing a letter it said Ms. Xu wrote to the University of Chicago’s president in response to the petition.

“In just one sentence she said, ‘Should your college decide to withdraw, I’ll agree,’” the article said. In Chinese, that sentence carries connotations of a challenge. It continued: “Her attitude made the other side anxious. The school quickly responded that it will continue to properly manage the Confucius Institute.” [Source]

At Mediapart, Gregory Lee, a French academic at Jean Moulin University who has worked extensively with China’s Minzu University, reflects on his institution’s engagement with Chinese universities and the rise of Confucius Institutes around the globe.

I still believe that both French and Chinese students benefited from these efforts. Of course, French students were able to take a more critical approach, but our Chinese students were also trained to think in a critical manner as a number of co-advised doctoral dissertations demonstrate. However, since the advent of the network of Confucius institutes around the globe, it has become clear that the openness of the Chinese to humanistic dialogue has not only changed but has gone into reverse, with the Chinese authorities offering financial packages to international students to engage in doctoral work on Chinese studies in China and under sole Chinese supervision.

[…] Last year, after a year’s haggling with the Beijing headquarters of the Confucius Institute network, my university decided to close down its Confucius Institute. Interference in the running of the Institute, disapproval of our programme of public lectures and events, and demands that we allow Beijing-appointed teachers access to our degree and research students left the university with no option but to cease operations. The director of the Confucius network in Beijing, Madame Xu Lin, who had brought about this situation through her intransigeance, then went on to cause a scandal at this year’s bi-annual European sinology congress held in Portugal. She demanded and obtained the removal of a page of the congress’s programme because it referred to the Taiwan research funding agency, the Chiang Ching-kuo Foundation. This international imbroglio has now become known as the Braga Incident after the name of the Portuguese university town where the European Association for Chinese Studies congress took place. [Source]