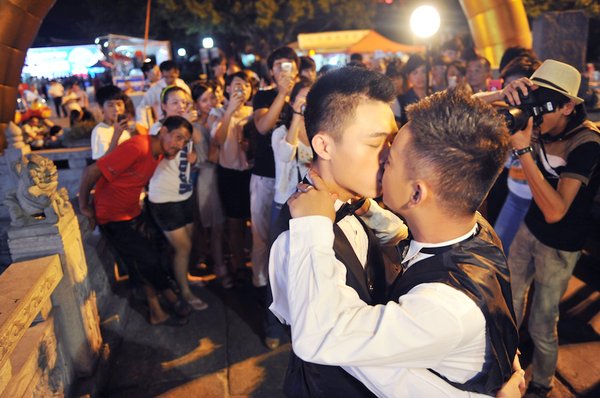 At The New York Review of Books, Ian Johnson talks to noted sexologist Li Yinhe about public and official attitudes toward sex, gay rights, and gender equality in China:

Why does the party care about sex? It doesn’t challenge its power base.

They still have this idea of what’s proper or not. It’s a very traditional idea. There are two main criteria for banning books or censoring. One is black and one is yellow. Black are political issues, like you’re opposing the CCP. Yellow is sex. This hasn’t changed.

[…] Are official attitudes toward sexuality also a reflection of earlier Chinese traditions?

I would divide Chinese sexual history into three very broad eras. In early traditional China, Chinese didn’t have that many prejudices. The view was that sex was the “harmony of yin and yang.” It was natural. Male and female together was a good thing, especially if it led to having children, because in traditional China children were so important. The second phase started around the Song dynasty (960-1279) The state began to emphasize purity and looked at things more from a perspective of virtue. There was a sense of antipathy toward sex. […] The pinnacle of this era was the Cultural Revolution (1966-76). Women and men mostly wore the same clothes and sex was almost purged from public view.

The third era is the start of the reform years [beginning in 1978]. Sex could be a good thing and wasn’t a crime. New ideas were introduced as well, such as sexual rights. This is something that the first phase didn’t have. [Source]

See also Teachers’ Day calls for an end to sexual harassment and discrimination at Chinese universities, coverage of a gay British diplomat’s marriage to a Chinese man in Beijing, a review or Richard Burger’s Behind the Red Door: Sex in China, and more on gay rights and gender equality in China, via CDT.